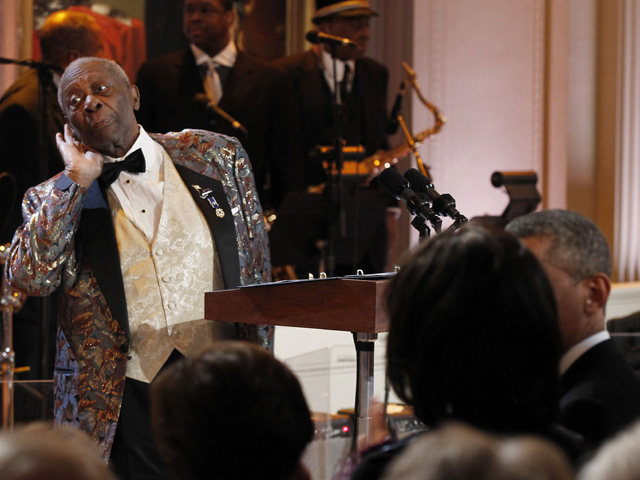 (CBS/AP) President Barack Obama joined Mick Jagger on stage to sing "Sweet Home Chicago" at the White House blues concert Tuesday night as a part of the "In Performance at the White House" series that airs on PBS.

The surprise performance by Mr. Obama came at the end of the playlist when the ensemble was singing the blues anthem of the president's  home town.

Buddy Guy prodded the president, saying he'd heard that the president sang part of an Al Green tune recently, and adding, "You gotta keep it up."

Then Jagger handed over the mic, and Mr. Obama seemed compelled to comply.

"Come on, baby, don't you want to go," the president sang out twice, handing off the mic to B.B. King momentarily, and then taking it back to tack on "Sweet Home Chicago" at the end.

Mr. Obama started the night out explaining that sometimes there are downsides to being the president. You can't just go for a walk, for example.

And then there are the times that more than make up for all those frustrations, he said, like Tuesday night, when Jagger, King, Jeff Beck and other musical giants came by the house to sing the blues.

"I guess things even out a little bit," Obama joked at the start of a rollicking East Room concert that was electrified by Jagger and the rest.

"This music speaks to something universal," Obama declared. "No one goes through life without both joy and pain, triumph and sorrow. The blues gets all of that, sometimes with just one lyric or one note. "

King, 86, arrived in a wheelchair but rose tall to kick off the night with a raucous "Let the Good Times Roll," quickly joined by other members of the ensemble. He continued on with his all-hits playlist causing the president and his wife, Michelle, to sway in their seats.

Beck slowed things down with an instrumental "Brush With the Blues," as anticipation built for the arrival of Jagger, who did not disappoint.

The longtime Rolling Stones frontman delivered on "I Can't Turn You Loose" and then teamed up with Beck on "Commit a Crime." Jagger got the president and his wife up out of their seats, swaying and clapping to the music, and picked up the pace with "Miss You," performed with Shemekia Copeland and Susan Tedeschi.

The blues concert will be part of the "In Performance at the White House" series that airs on PBS. This one, designed to recognize Black History Month, will be broadcast on Monday on PBS stations and aired later on American Forces Network. Other  White House  programs  have focused on country music  and show tunes.