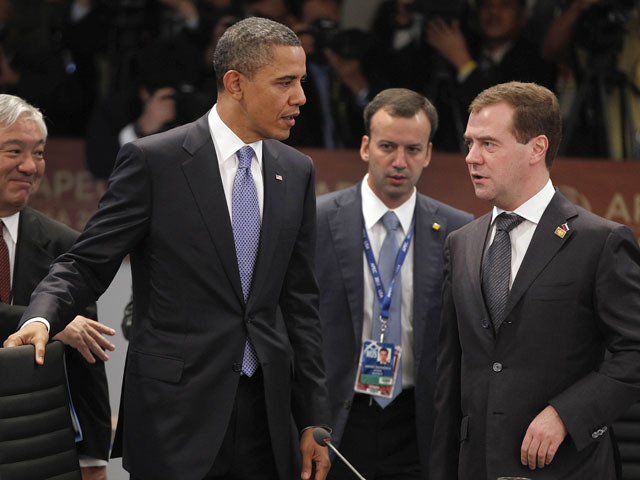 KAPOLEI, Hawaii - Defending his efforts to contain Iran's nuclear ambitions, President Barack Obama said economic sanctions against Tehran have had "enormous bite," and he will consult with other nations on additional steps to ensure that Iran does not acquire an atomic weapon.

Obama expressed confidence Sunday that Russia and China in particular understand the threat that a nuclear armed Iran would pose and said their leaders agree that Iran cannot weaponize its nuclear power and trigger a nuclear arms race in the region.

The president, answering questions at a press conference during an Asia-Pacific economic summit, did not specifically say he would consider military action if Tehran were to persist in arming itself with a nuclear weapon. But he added: "We are not taking any options off the table. Iran with nuclear weapons would pose a threat not only to the region but also to the United States."

A report Friday from the International Atomic Energy Agency provided new evidence that Iran's nuclear program includes clandestine efforts to build a bomb. The report, circulated among the U.N. watchdog agency's member countries, includes satellite images, letters, diagrams and other documents. It alleges Iran has been working to acquire equipment and weapons design information, testing high explosives and detonators and developing compute models of a warhead's core. Taken together, it's the most unequivocal evidence yet that the Iranian program ranges far beyond enriching uranium for use in energy and medical research, which is what Tehran says it's for.

In meetings Saturday with Russian President Dmitry Medvedev nor Chinese President Hu Jintao, Obama sought to rally support for putting new pressure on Iran's regime. But there was little public sign either country was ready to drop its opposition to additional sanctions. Four rounds of U.N. sanctions have caused economic hardship in Iran, but have yet to force any change in the nuclear program.

Obama declined to directly respond to criticism of his Iran policy from Republican presidential candidates Saturday, including former Massachusetts Gov. Mitt Romney's declaration that Obama's re-election would mean a nuclear armed Iran. But he took a swipe at his foes anyway.

"Now is this an easy issue?" he asked. "No, anyone who claims it is, is either politicking or doesn't know what they're talking about."

He also rejected assertions from GOP candidates such as Herman Cain and Michelle Bachmann that they would be willing to use the interrogation practice known as waterboarding, a simulated form of drowning, on suspected terrorists.

"Anyone who has read about and understands the practice of waterboarding would say that that is torture, period," he added.

Obama, hosting the APEC conference in his home state, took questions in the late afternoon sunshine of a quintessential Hawaii scene, with palm trees and blue waters sprawled out behind him.

The president challenged China to move more quickly to let its currency to appreciate more rapidly and ending measures that disadvantage or pirate foreign intellectual property.

"It's time for them to go ahead and move toward a market-based system for their currency," he said.