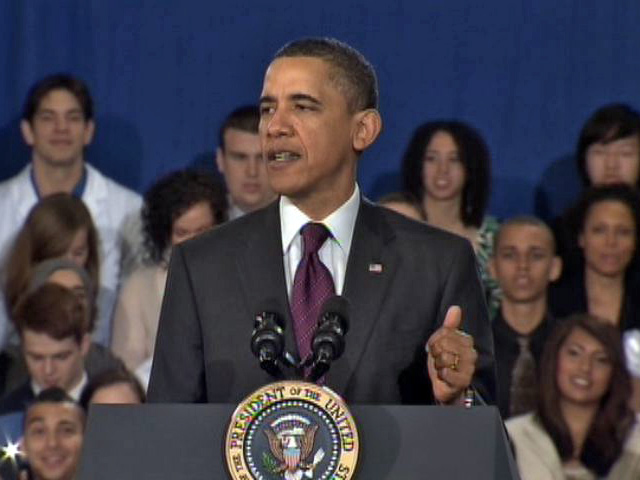 President Obama invoked the 2007 collapse of the Interstate 35-W bridge in Minneapolis while criticizing cuts to infrastructure in the Republican budget plan at a town hall meeting on Tuesday.

"According to the Republican budget that was passed, for example, we would have to eliminate transportation funding by a third," he said. "...You remember when that bridge in Minnesota collapsed with all those people on it and there was a big hue and cry, how could this happen in America?"

Mr. Obama noted that the United States has been given a "D" grade for its infrastructure and said U.S. roads, sewers and bridges are "all deteriorating." He added: "We cut transportation by another third and what's going to happen to America? We're just going to have potholes everywhere? We're just gonna have bridges collapsing everywhere?"

While experts say America's aging infrastructure is a significant problem, the bridge collapse in Minnesota, which killed 13 people, was found to have been caused primarily by a design flaw.

Mr. Obama made the comments while speaking at Northern Virginia Community College in Annandale, where he made the case for his own deficit reduction plan. His proposal would cut $4 trillion over a decade by cutting spending and raising taxes on the wealthy.

The president contrasted his plan with the Republican plan, which he said asks too much of average Americans while giving a handout to the highest-earners. He said the one thing everyone in Washington generally agrees on is that the deficit should be reduced by about $4 trillion in the medium term, and that something needs to be done to reform Medicare and bring down health care costs.

The president said he is "hopeful" that a deficit compromise can be reached, adding, "Both sides have come together before. I believe we can do it again."

But Mr. Obama highlighted significant differences between the plans when it comes to spending and taxes. He said that he won't reduce the deficit by cutting investments in education or infrastructure, as the House GOP budget would. And he added that if the United States does not invest in those things, especially in infrastructure and broadband and high speed rail, companies will not invest or do business or create jobs in the United States.

He complained that "our broadband lines are slower than places like South Korea."

The president also promised a woman who asked if Social Security would be around when she retires 25 years from now that it would remain intact. He said it will be relatively easy to address Social Security by raising the cap on income that is subject to Social Security taxes.

The town-hall meeting was part of the president's campaign-style push for his deficit plan this week, which includes a trio of town halls and interviews with local reporters in potential presidential battleground states.