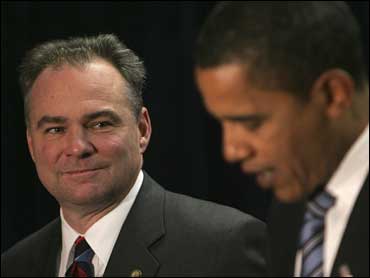 President-elect Barack Obama formally introduced his choice as the new Democratic Party chairman Thursday, and praised the departing chairman, who was not present.

He also had kind words for Kaine's predecessor, Howard Dean, who sometimes clashed with Obama's aides. Obama called Dean, a former Vermont governor who ran for president in 2004, "a visionary and an effective leader."

Dean, however, did not attend the brief ceremony at the party's national headquarters in Washington. "My understanding is that he's traveling, so he couldn't attend," said Tommy Vietor, an Obama spokesman.

The DNC confirmed that Dean was traveling to American Samoa to attend the inauguration of the governor and raise money in what is his last stop in all of the country's 50 states and territories.

Obama's transition officials did not immediately respond when asked whether Dean was invited to appear with Obama and Kaine.

But Democrats with knowledge of the situation, who spoke on the condition of anonymity to avoid angering the Obama team, said Dean stayed away at the request of Obama advisers.

Kaine plans to work at the party part-time until 2010, when his four-year term as governor is up and he can take over the DNC full-time. He said Thursday he hopes to promote Obama's agenda, carry "the proud banner of a proud party," and encourage Americans "in new ways to be active in civic life." He said Dean did "a remarkable job" as chairman.

In February 2007, Kaine became the first governor outside Obama's home state of Illinois to endorse his presidential bid. He campaigned vigorously for Obama nationally and helped Obama become the first Democrat in 44 years to win Virginia in a presidential race. Kaine also was among the finalists for Obama's running mate before he settled on Delaware Sen. Joe Biden.

Last fall, Kaine said he wasn't interested in the DNC job but changed his mind when Obama pressed him to accept.

Virginia Republicans have criticized Kaine for taking the political job while serving as governor. Kaine has said he will do the DNC job on personal time, evenings and weekends, and take almost no role through next month, while the state legislature is wrestling with a $3 billion budget crisis.

His tasks at the DNC will include retiring the party's $15 million debt from last November's election, reinforcing the message of the new Democratic administration and the party's strengthened majorities in Congress, and preparing for the 2010 midterms and elections beyond.

Dean assumed the DNC chairmanship in 2005 after losing the Democratic presidential nomination a year earlier. He quickly embarked on a 50-state strategy - sending party organizers to each state, even the Republican ones - but his strategy drew criticism from Democrats within the Washington establishment.

In 2006, Dean clashed with Sen. Charles Schumer, the then head of the Senate Democrats' campaign committee, and Illinois Rep. Rahm Emanuel, who led the House Democratic effort and is now Obama's incoming chief of staff, over how to spend Democratic dollars. Dean's critics had argued that the DNC's focus should be on competitive races rather than spending money on strengthening state parties.

But that year, Democrats won in Republican-leaning districts in Indiana and North Carolina to seize control of the House and Senate. And, two years later, Obama captured the presidency in an electoral landslide, racking up decades-long Republican states such as Virginia and Indiana, while Democrats strengthened their congressional majority.