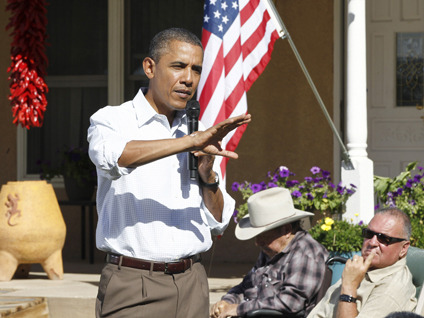 President Obama's four-state tour this week, intended to rally voters and promote his economic agenda, turned personal today when an Albuquerque resident asked the president if he is a Christian.

"I'm a Christian by choice," Mr. Obama said, the New York Times reports. "My family, frankly, they weren't folks who went to church every week. My mother was one of the most spiritual people I knew but she didn't raise me in the church, so I came to my Christian faith later in life and it was because the precepts of Jesus Christ spoke to me in terms of the kind of life that I would want to lead.

"Being my brothers and sisters' keeper, treating others as they would treat me, and I think also understanding that Jesus Christ dying for my sins spoke to the humility we all have to have as human beings, that we're sinful and we're flawed and we make mistakes and we achieve salvation through the grace of God," he continued. "But what we can do, as flawed as we are, is still see God in other people, and do our best to help them find their own grace. That's what I strive to do, that's what I pray to do every day."

Mr. Obama's religion has long been a subject of interest. On the presidential campaign trail, Mr. Obama was criticized for attending a Christian church led by the controversial Rev. Jeremiah A. Wright Jr. Yet even after the controversy surrounding his former Christian church, the misconception that the president is not Christian has persisted. A survey conducted over the summer showed that nearly one in five Americans believe Mr. Obama is a Muslim.

The Times reports that Mr. Obama also said today that as president, he "deeply believes that part of the bedrock strength of this country is that it embraces people of many faiths and of no faith."

Sitting in the backyard of a disabled veteran and a schoolteacher, Mr. Obama was also queried about his views on abortion. The president answered that they should be "safe, legal and rare."