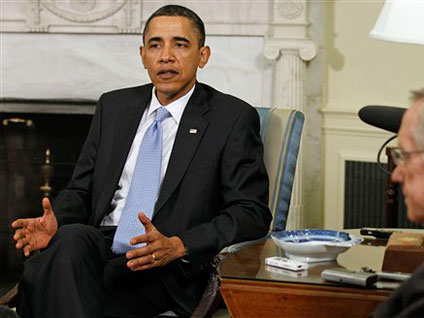 Asked if he would consider nominating a judge to the Supreme Court who does not support abortion rights, President Obama said today that, like presidents before him, he is not applying a "litmus test" on that or any issue.

But he went on to say that he wants "somebody who is going to be interpreting our Constitution in a way that takes into account individual rights, and that includes women's rights. And that's going to be something that is very important to me."

"Part of what our core Constitutional values promote is the notion that individuals are protected in their privacy and their bodily integrity, and women are not exempt from that," the president added. He said he is "somebody who believes that women should have the ability to make often very difficult decisions about their own bodies and issues of reproduction."

In remarks before a meeting with Congressional leaders to discuss candidates for the Supreme Court seat coming open with the retirement of Justice John Paul Stevens, Mr. Obama said he was hoping to replicate the "smooth, civil, thoughtful nomination process and confirmation process" that occurred for his first Supreme Court pick, Sonia Sotomayor.

He said he excepted to announce his pick before May 26th, when the Sotomayor pick was announced, and hoped to do so earlier; "my hope," he said, "is that we're going to be able to get a Supreme Court nominee confirmed in time for the next session."

The president said it is important to "get this process wrapped up" quickly so that the new justice is prepared to deal with the important cases that the court will address in the fall.

The president said the four men had come to the White House to "consult with me" and that he is "interested in hearing their thoughts and concerns before any final decisions are made."

At the outset of his comments, Mr. Obama lauded Stevens as "one of the finest Supreme Court justices that we have seen."

He said Stevens "operated with extraordinary integrity and fidelity to the law" and that while his are "tough shoes to fill," he is confident that he will tap a nominee that will earn the confidence of the Senate and the country and will deliver "evenhanded justice to all Americans."

PHOTOS: Who Will Replace Justice Stevens?