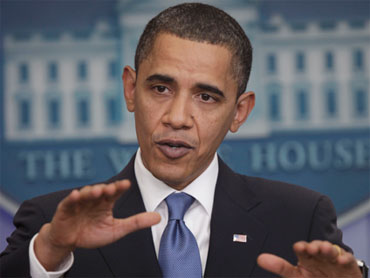 (AP)
In an interview with Bloomberg News, President Obama likened bonuses for Wall Street CEOs to outrageous salaries for athletes, but he said he does not begrudge the bank chiefs for pulling in such hefty sums.

"I, like most of the American people, don't begrudge people success or wealth," Mr. Obama said. "That is part of the free-market system."

JP Morgan Chase CEO Jamie Dimon was awarded a bonus of around $16 million for 2009 after leading the company to profit through the financial crisis. Goldman Sachs Group CEO Lloyd Blankfein, meanwhile, is getting a $9 million bonus for 2009 after his company's profits soared last year.

Mr. Obama called both Dimon and Blankfein "savvy businessmen" but said they are making "an extraordinary amount of money." Still, he said, "there are some baseball players who are making more than that and don't get to the World Series either, so I'm shocked by that as well."

Both executives are receiving their bonuses in stock rather than cash, something the Obama administration has advocated as a way of ensuring more stability in the banking industry. Receiving a stock bonus, Mr. Obama said, "requires proven performance over a certain period of time as opposed to quarterly earnings."