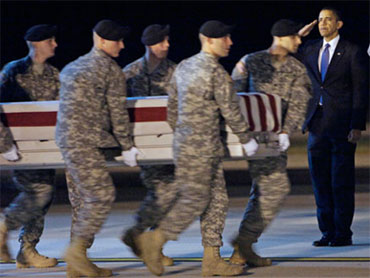 President Barack Obama made a midnight dash to this air base Wednesday to honor the return of fallen soldiers, absorbing the ultimate cost of war as the United States endures its deadliest month of the Afghanistan campaign.

On a clear fall night, Mr. Obama flew by Marine One helicopter to Dover Air Force Base to greet the flag-draped cases of 18 Americans killed in action this week.

After landing, the president, wearing a dark topcoat, got into a motorcade to a base chapel, where he met privately with families of the fallen Americans. He had arrived on the base at 12:34 a.m. Thursday and returned to the White House before dawn.

Mr. Obama was taking part in a solemn process, to unfold in four movements: the transfer of the fallen 15 soldiers and three Drug Enforcement Agency agents from the back of the C-17 to a transport vehicle to a base mortuary.

As part of the official party, Mr. Obama was to go on the plane, each time witnessing silently as a chaplain said a prayer for the fallen, the family, the country and the war effort.

A president of two inherited wars, Mr. Obama is winding down U.S. involvement in Iraq, but the troubled war in Afghanistan is only widening. His dramatic visit to witness remains of the fallen comes as he weighs whether to send more troops into the Afghan war zone.

Mr. Obama meets tomorrow with the Joint Chiefs of Staff and other military leaders as he weighs whether to send more troops into the war zone, reports CBS News senior White House correspondent Bill Plante.

The White House kept Mr. Obama's plans off his schedule, informing a small group of traveling reporters in advance on condition of secrecy.

The Pentagon this year lifted its 18-year ban on media covering the return of U.S. service members killed in action if family permission is provided. With Mr. Obama in attendance, the media were to witness the transfer of one fallen soldier: Sgt. Dale R. Griffin of Terre Haute, Ind.

The flag-draped remains of Griffin were to be carried off the plane by six Army soldiers in fatigues and black berets. The transfer case then was being placed in a vehicle to be taken to the mortuary facility on the base.

The rest of the solemn morning was kept out of sight of the press on family wishes.

The Dover base, about 100 miles from the White House, is the entry point for service personnel killed overseas.

Mr. Obama's predecessor, President George W. Bush, visited the families of hundreds of fallen soldiers but did not attend any military funerals or go to Dover to receive the coffins. In a 2006 interview with the military newspaper "Stars and Stripes," Bush said he felt the appropriate way to show his respect was to meet with family members in private.

Mr. Obama is in the midst of an intense, weekslong review of his war strategy in Afghanistan. He has upped the U.S. commitment there to 68,000 troops and is considering sending a large addition next year, but fewer than the 40,000 troops requested by his commander there, U.S. officials tell The Associated Press.

Most Americans either oppose the war or question whether it is worth continuing to wage.

At least 55 U.S. forces have been killed in October. That's the deadliest month of the war for U.S. forces since the 2001 invasion to oust the Taliban.

On Monday, a U.S. military helicopter crashed returning from the scene of a firefight with suspected Taliban drug traffickers in western Afghanistan, killing 10 Americans including three Drug Enforcement Administration agents. In a separate crash, four more U.S. troops were killed when two helicopters collided over southern Afghanistan. On Tuesday, eight soldiers were killed when their personnel vehicles was struck by roadside bombs in the Afghanistan's Kandahar province.

The lifting of the ban on media coverage of bodies returning to Dover was done to keep the human cost of war from being shielded from the public.

Air Force personnel are diligent about not calling the transfer of remains a "ceremony" to avoid any positive connotations; they call them "dignified transfers."

Mr. Obama meets Friday with the Joint Chiefs of Staff, the military leaders who would have the responsibility for carrying out his strategy decisions. White House officials said Mr. Obama keep considering his options with advisers over the next couple of weeks, and other war council meetings may still be called during that period.

The White House preference is to announce the troop decision after the Afghanistan's run-off presidential election on Nov. 7, but before Obama leaves for a long and unrelated trip to Asia, four days later on Nov. 11. But no announcement plan has been settled upon by Mr. Obama and his aides, officials said.