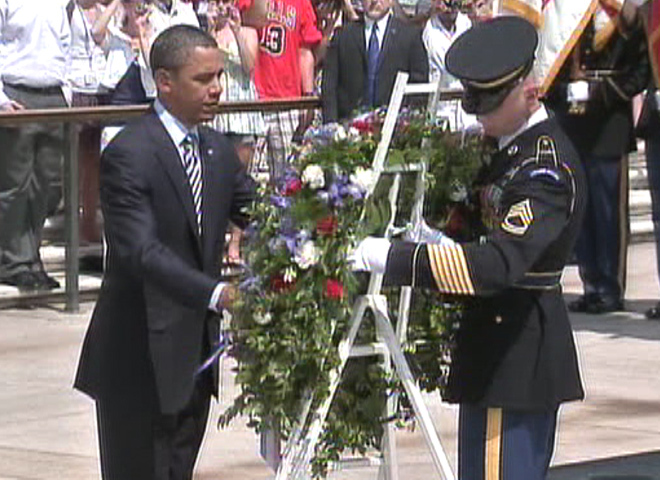 In a Memorial Day speech at Arlington National Cemetery Monday, Mr. Obama expressed the honor and solemn responsibility he feels serving as commander in chief of "one of the finest fighting forces the world has ever known."

He paid tribute to service members who lost their lives in service: "Venerable warriors who lay here and across this country and around the globe. Each of them adds honor to what it means to be a soldier, sailor, airman, Marine and Coast Guardsman. Each is a link in an unbroken chain that stretches back to the earliest days of our republic.

"And on this day, we memorialize them all. We memorialize our first patriots, blacksmiths, farmers, slaves and freed men who never knew the independence they won with their lives. We memorialize the armies of men - and women disguised as men - black and white, who fell in apple orchards and corn fields in a war that saved our union. ...

"The patriots we memorialize today sacrificed not only all they had but all they would ever know. They gave of themselves until they had nothing more to give. It's natural when we lose someone we care about to ask why it had to be them. 'Why my son? Why my sister? Why my friend? Why not me?' These are questions that cannot be answered by us.

"But on this day we remember that it is on our behalf that they gave their lives. We remember it is their courage, their unselfishness, their devotion to duty that has sustained this country through all its trials, and will sustain it through all the trials to come.

"We remember that the blessings we enjoy as Americans came at a dear cost. Our presence in a free society bears testimony to their enduring legacy. Our nation owes a debt to its fallen heroes that we can never fully repay. But we can honor their sacrifice, and we must. We must honor it in our own lives by holding their memories close to our hearts, and heeding the example they set.

"And we must honor it as a nation by keeping our sacred trust with all who wear America's uniform and the families who love them - by never giving up the search for those who have gone missing under our country's flag or held as prisoners of war, by serving our patriots as well as they serve us, from the moment they enter the military to the moment they leave it, to the moment they are laid to rest. That is how we can honor the sacrifice of those we've lost. That is our obligation to American's guardians."

Earlier, the president laid a wreath at the Tomb of the Unknowns.

The ceremonies also include a U.S. Marine Band concert at the Memorial Amphitheater.

Also scheduled for Monday at the Tomb of the Unknowns is a "national moment of silence" ceremony at 2:55 p.m. ET., and a memorial service by the Sons of Union Veterans of the Civil War at 5 p.m.

President Obama called Dempsey "one of our nation's most respected and combat-tested generals."

The president also announced he has chosen Navy Adm. James Winnefeld to succeed Cartwright as vice chairman of the Joint Chiefs and Army Gen. Ray Odierno as his candidate to replace Dempsey as Army chief of staff.

Mr. Obama called America's servicemen and women "the best our nation has to offer, and they deserve nothing but the best in return, and that includes leaders."