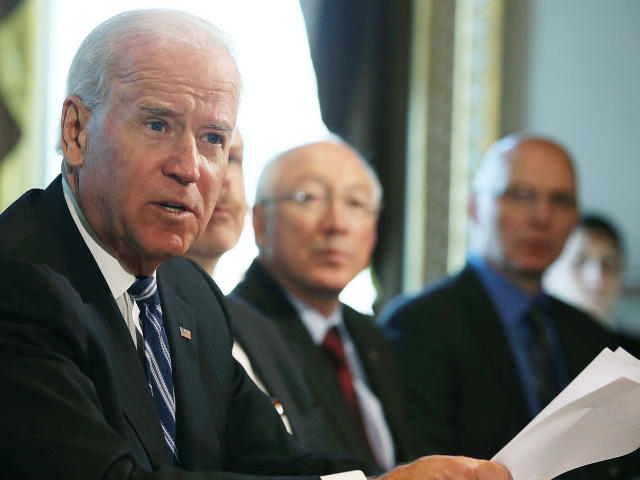 Amid mounting effort from pro-gun activists to prevent the passage of new gun laws, President Obama today pledged to press on with legislative efforts to reduce gun violence -- though he stressed there are "some steps" he can take without Congress as well.

Speaking in a press conference exactly a month after the shootings in Newtown, Conn., the president teased a "range of steps we can take to reduce gun violence" he said he'll discuss in detail later this week. But he acknowledged that he doesn't know how many of his proposals will be able to pass through the GOP-led House of Representatives, and suggested he's exploring administrative ways to avert the congressional process.

"What you can count on is, is that the things that I've said in the past -- the belief that we have to have stronger background checks, that we can do a much better job in terms of keeping these magazine clips with high capacity out of the hands of folks who shouldn't have them, an assault weapons ban that is meaningful -- that those are things I continue to believe make sense," he told reporters. "Will all of them get through this Congress? I don't know. But what's uppermost in my mind is making sure that I'm honest with the American people and with members of Congress about what I think will work."

In the wake of the Newtown shootings, in which 20 first-graders and six adult school employees were shot dead at Sandy Hook Elementary School, Mr. Obama tasked Vice President Joe Biden with developing a series of recommendations aimed at curbing gun violence. Biden, the original author of the now-expired Assault Weapons Ban, has spent the last few weeks consulting stakeholders on the issue, and Mr. Obama said the two would meet to discuss Biden's recommendations later today.

Biden has already suggested that his recommendations would include calls for universal background checks, reinstating the Assault Weapons Ban, and stricter regulations on high-capacity magazine ammunition clips. And while the hugely powerful National Rifle Association (NRA) was included in the meetings with Biden, its leadership has all but announced its intent to fight any new laws making gun regulations more stringent.

Mr. Obama said today he wouldn't let that impact his thinking on the subject.

"My starting point is not to worry about the politics. My starting point is to focus on what makes sense, what works, what should we be doing to make sure that our children are safe and that we're reducing the incidence of gun violence," Mr. Obama said.

Barring congressional consensus -- which in recent years has proven elusive even on the most uncontroversial legislation -- Mr. Obama suggested he would take executive action where possible in order to achieve his goals.

"I'm confident that there are some steps that we can take that don't require legislation and that are within my authority as president. And where you get a step that has the opportunity to reduce the possibility of gun violence, then I want to go ahead and take it," he said. He cited data gathering about gun violence -- which New York Mayor Michael Bloomberg argues has been hindered thanks to the efforts of the gun lobby -- as one of the steps that might be actionable through executive order.

Even so, Mr. Obama's options are limited without congressional consensus. Today, the president accused of those who oppose "common sense" gun safety measures of "ginning up fear" among gun owners for their own economic benefit.

"I think that we've seen for some time now that those who oppose any common sense gun control or gun safety measures have a pretty effective way of ginning up fear on the part of gun owners that somehow the federal government's about to take all your guns away. And, you know, there's probably an economic element to that," he said. "It obviously is good for business, but I think that those of us who look at this problem have repeatedly said that responsible gun owners, people who have a gun for protection, for hunting, for sportsmanship, they don't have anything to worry about."

He added: "The issue here is not whether or not we believe in the Second Amendment. The issue is: Are there some sensible steps that we can take to make sure that somebody like the individual in Newtown can't walk into a school and gun down a bunch of children in a -- in a shockingly rapid fashion?"