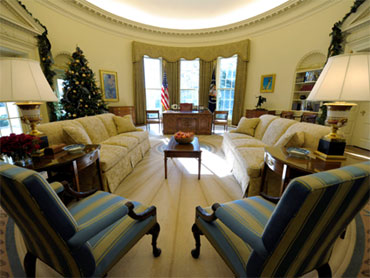 The decorative china plates are long gone. Historic metal gadgets and Native American pottery now stand in their stead. Resting on a bookshelf is a framed program from the 1963 March on Washington, where Martin Luther King Jr. delivered his famous "I have a dream" speech.

President Barack Obama gradually has made the Oval Office his own.

To varying degrees, each president puts his own imprint on this celebrated workspace. Even the smallest change - Obama's penholder, for example - is closely watched for symbolism.

While recent presidents have each done a big overhaul upon taking office, Obama decided against major redecorating. It would have struck a sour note in a time of economic distress. But over his first year in the White House, the office has come to reflect his tastes.

The table behind Obama's desk is full of family photos - a wedding picture, shots of his girls as toddlers, a picture from the day he announced for president and more - photos that he says remind him "why I'm doing what I'm doing." Out the window, the president can watch daughters Sasha and Malia climb on the playscape erected for them last spring.

There's now a bust of King in the Oval Office, in addition to the March on Washington program that previously hung on Obama's "wall of heroes" in his Senate office.

"This office, I think, reminds you of what's at stake, how many hopes and dreams are placed in what goes on here at the White House," Obama said in a recent television interview with Oprah Winfrey.

Perhaps no room in the White House is more closely associated with the presidency.

It is where Obama signs letters to the families of fallen soldiers. Where he told his war council of his decision to ship thousands more troops to Afghanistan. Where he receives daily briefings on the security threats facing the nation and on the state of the economy.

California decorator Michael Smith worked with Obama on updating the look of the Oval Office.

The pottery and gadgets arrived in the Oval Office months after a collection of decorative plates from the Bush years made a quick departure - plates just weren't his style, Obama said.

A big bowl of fresh apples on the coffee table, something of an Obama family tradition, has proved hugely popular with visitors, although the president still keeps M&Ms handy for kids.

Obama has set a less formal tone for the Oval Office from his first days as president. When the White House released its first picture of him at work there, Obama was in shirt sleeves. George W. Bush, by contrast, made it a point to be in coat and tie whenever he entered the Oval Office.

As for artwork, the Texas landscapes that dominated the walls in the Bush years were gone with Obama's inauguration. Swapped back in were traditional Oval Office paintings including Childe Hassam's "The Avenue in the Rain," an impressionist view of New York's flag-bedecked Fifth Avenue, and Norman Rockwell's colorful "Statue of Liberty."

Deep meaning can be read into small shifts in Oval Office decor.

Some Britons took offense when Winston Churchill's bust was replaced with King's. But the decision to return the Churchill bust to the British - it had been presented by former Prime Minister Tony Blair to Bush on loan - had been made before Obama even arrived.

"It was already scheduled to go back," Allman said.

The White House seemed to be trying to make amends when it made a point of reporting that Obama would keep on his desk a wooden penholder that British Prime Minister Gordon Brown gave him during a March visit. The penholder is crafted from wood taken from the HMS Gannet, the sister ship to the Resolute, a British naval vessel whose wood was used to make the presidential desk.

Even as presidents come and go, many Oval Office features project continuity.

The marble mantle over the fireplace arrived when William Howard Taft expanded the president's office and first shaped it into an oval in 1909. Other carry-overs from administrations past include a Rembrandt Peale painting of George Washington, a portrait of Abraham Lincoln by George Henry Story and a tabletop Frederic Remington sculpture, "The Bronco Buster."

The Resolute desk has been a favorite of presidents for more than a century. Queen Victoria presented it to President Rutherford B. Hayes.

When a TV crew accidentally knocked over a glass of water on the desk during a June photo session, Obama didn't get the name quite right when he deadpanned, "It's the Resolution Desk. It's only like 100 years old."