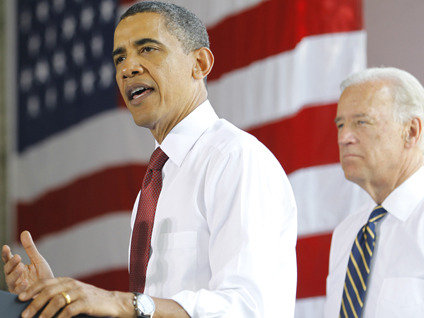 President Obama says the addition of 431,000 jobs in May proves "the economy is getting stronger by the day."

He acknowledged that a surge in Census Bureau hiring helped improve the monthly jobs snapshot, a fact that Republicans have used to cast the jobs figures as less positive than they otherwise appear.

"Positive job growth in May is an encouraging sign, but it is disappointing that nearly all of those gains are temporary, taxpayer-funded government jobs through the U.S. Census," House Republican Leader John Boehner said in a statement.

Added Senate Republican Leader Mitch McConnell: "Although Americans appreciate a job of any kind these days, temporary government Census jobs are not the kind of employment that will help kick-start and sustain our economy."

Mr. Obama warned in his comments that the recovery is still in the "early stages," but he said businesses are starting to hire again.

"This economy hasn't returned to prosperity yet but we're heading in the right direction," the president said. He warned that there will still be some economic "ups and downs."

Mr. Obama also went into midterm campaign mode during the economic event. He told truck plant workers the nation could "return to the failed economic policies of the past" or "we can decide if we want to move forward."

The economic report gave the president a momentary break from the oil crisis just hours before his third trip to the Gulf region. But he still alluded to the crisis with another slap at the previous administration's policies.

"We already tried stripping away rules and regulations that kept Wall Street, banks and oil companies in bounds," Mr. Obama told the Maryland audience. "We let them play by their own rules instead and it didn't work."

In a written statement, Republican National Committee Chairman Michael Steele said "the underlying fact is that 9.7 percent unemployment is unacceptable by any standard."

Steele described the president's economic policies as "a colossal failure."

On the White House website, Christina Romer, Chair of the Council of Economic Advisers, stressed that "it is important not to read too much into any one monthly report, positive or negative."

"The monthly employment and unemployment numbers are volatile and subject to substantial revision," she wrote. "Emphasis should be placed on persistent trends rather than month-to-month fluctuations."

Peter Maer is a CBS News White House correspondent. You can read more of his posts in Hotsheet here. You can also follow him on Twitter.
View CBS News In
CBS News App Open