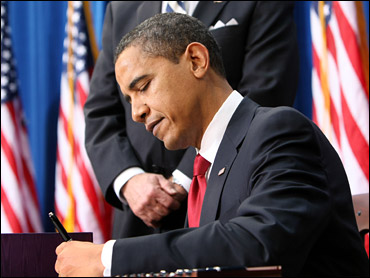 (AP)
The economic stimulus package – also known as the American Recovery and Reinvestment Act – turns 100 days old today, and the Obama administration is marking the occasion in two ways.

The first is a speech by the president at 2:40 ET in Nevada "on the important early investments included in the Recovery Act." And the second is a just-released report on the results of the $787 billion piece of legislation, from Vice President Joe Biden.

In the report, the administration argues that the stimulus package has already created or saved 150,000 jobs – though it should be noted that jobs "created or saved" is a notoriously difficult figure to measure. It also says that $112 billion in money from the package has been "obligated" to programs and projects so far.

The Republican National Committee, unsurprisingly, is not impressed by these figures: It sent a "research briefing" to reporters arguing that "after 100 days, the stimulus has produced waste and fraud, but no jobs."

The briefing quotes a May 12th New York Times report that "the federal government has paid out less than 6 percent of the money, largely in the form of social service payments to states." The story notes that much of the money has gone to "cover the costs of Medicaid and unemployment benefits."

The RNC goes on to complain that "Murtha airport received $800,000 from the stimulus," that a woman who had died was accidentally sent a stimulus check, and that states are struggling to oversee and manage stimulus spending. Meanwhile, the RNC notes, the "unemployment rate continues to rise."

Republican National Committee Chairman Michael Steele suggested in a statement that the report amounts to PR from the president designed "to convince voters his reckless spending plan is working."

"Let's be clear: 100 projects, nearly $1 trillion spent, and 1 million jobs lost doesn't sound like progress to me," he said.

The administration, by contrast, argues that the stimulus package "is jump-starting the economy today and building a new foundation for sustained economic growth in the future."

The report breaks down stimulus projects by region; in the Southern Region section, for example, it notes that "Darlington County, South Carolina, will be the location of a new 4,200 square-foot library supported in part by $787,000 of Recovery Act Community Facility Grant funding."

"We have put a spotlight on the job-creating power of the Recovery Act with workers at a transformer plant in Missouri and a windows factory in Illinois; with police academy graduates in Ohio, and with members of our armed forces in California," Biden writes in the report's introduction. "We saw factories being reopened, highways being repaved, and bridges being rebuilt."

"This report details those travels and paints an exciting picture of an America bouncing back — and looking forward," he adds.