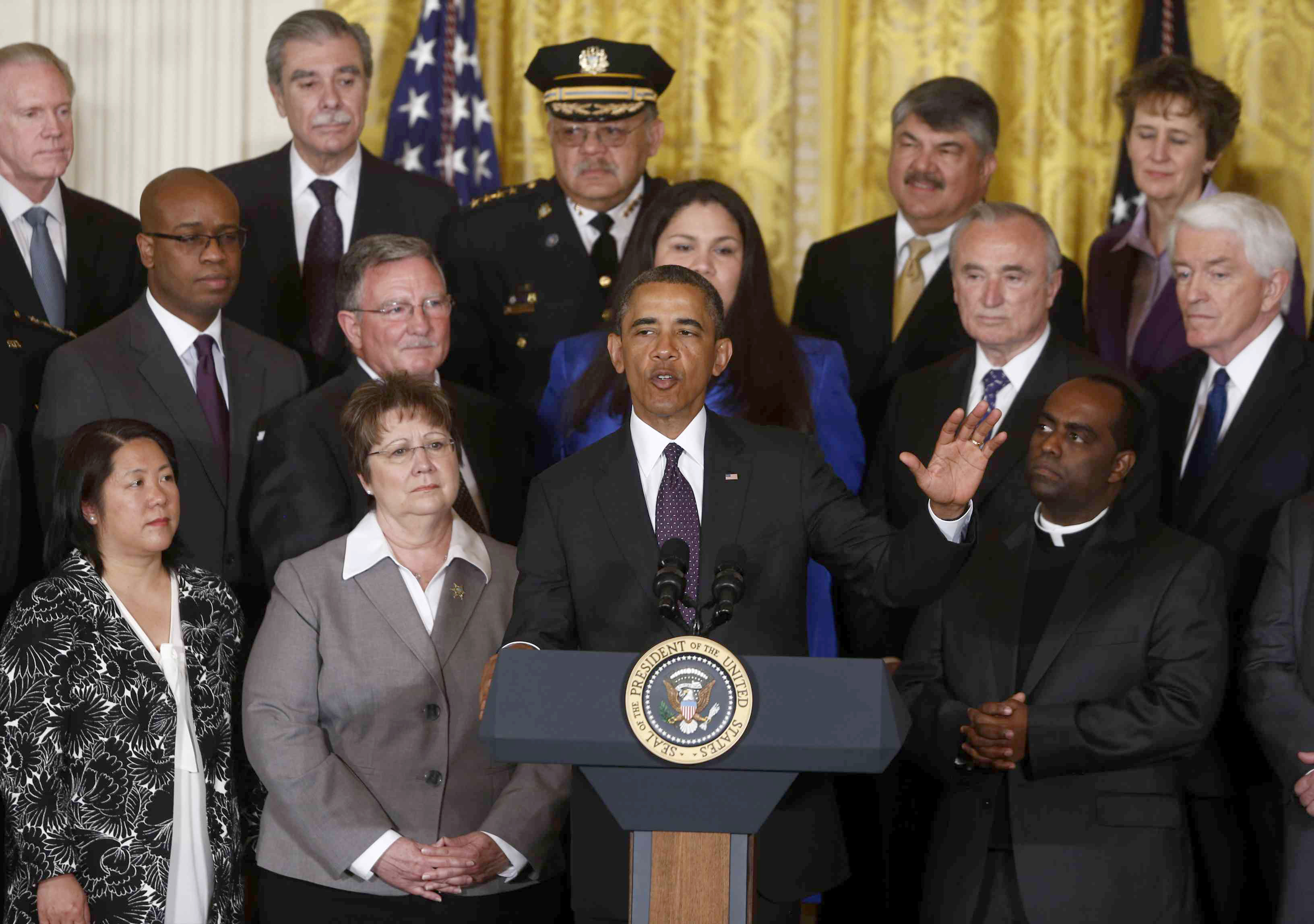 Hours before the Senate is poised to decide whether or not to take up legislation that would overhaul the nation's immigration system, President Obama delivered a forceful defense of the bill as a fair, bipartisan, common-sense fix to the nation's "broken" system, which would serve the nation's economy and undocumented immigrants alike.

"This week, the Senate will consider a common-sense, bipartisan bill that is the best chance we've had in years to fix our broken immigration system," said Mr. Obama, speaking from the East Room of the White House, surrounded by a group of law enforcement representatives, business and labor leaders, faith leaders, and Republican and Democratic elected officials who support the Senate legislation. "To truly deal with this issue Congress needs to act. And that moment is now."

The Senate held procedural votes and began a weeks-long debate on the legislation Tuesday afternoon. But while the bill was hammered out over a period of months by lawmakers of both parties, its fate rests in the hands of a bitterly divided Congress that has shown little ability in recent months to pass even the most so-called "common-sense" proposals.

The plan under discussion, which made it out of committee last month, creates a pathway to citizenship for the nation's approximately 11 million undocumented immigrants, but only after certain border security improvements are initiated. Only those undocumented immigrants who are employed and have a clean criminal record would be granted legal status, and they would have to go to the back of the line until their status is granted, facing potential waits of 10 years or more. Meanwhile, border security would be strengthened, and the legal system governing the process would be modernized.

Among many Republicans, the border security measure is the biggest sticking point. Some say it's not strong enough, or that it would be difficult to enforce implementation.

Mr. Obama acknowledged the concerns over the issue in his remarks Tuesday morning, and stressed that, under his administration, "we made border security a top priority" and currently "have twice as many Border Patrol agents as we did in 2004."

"We have more boots on the ground along our southern border than at any time in our history. And in part by using technology more effectively, illegal crossings are near their lowest level in decades," Mr. Obama said. "Having put border security in place, having refocused on those who could do our communities harm, we also, then, took up the cause of the young DREAMers... who are brought to this country as children."

For other Republicans, the path to citizenship is the deal breaker.  Sen. Ted Cruz, R-Texas, an outspoken opponent to the bill, blames the president and Senate Democrats for insisting on that provision and said Tuesday that will eventually lead to the bill's defeat.

"Of all of the issues swirling around this bill, the path to citizenship for those who are here illegally is the single most divisive issue," Cruz said.

"And that is the issue on which the Obama White House and Senate Democrats insist, and by insisting on that division I believe they by design destine this bill to be voted down."

During remarks on the Senate floor this morning, Minority Leader Mitch McConnell, R-Ky., said the bill would require "major changes" before becoming law. But he expressed openness to debating and tweaking the legislation to make it more palatable to his fellow conservatives.

"This bill has some serious flaws. And we need to be serious about fixing them," McConnell said. "That's what the next few weeks are about: They're about giving the entire Senate, and indeed, the entire country, an opportunity to weigh in on this debate, to make their voices heard, and try to improve our immigration policy. And that means an open amendment process."

Most lawmakers on both sides of the aisle have, since the 2012 presidential election, loosely agreed that some sort of immigration reform is necessary. Interest groups and super PACs are echoing that broad desire in a series of ads that will air this week - from both the Service Employees International Union (SEIU) and Crossroads GPS, according to Politico - supporting the notion of reform.

But, as evidenced by the fraught process of developing a bill to put forward, the negotiations remain delicate.

Mr. Obama acknowledged Tuesday that the bill up for discussion won't suit everyone to 100 percent satisfaction - including him - but he urged supporters of reform to ignore attempts from the opposition to "gin up fear and create division."

"I want you to think about your own parents, and your own grandparents, and your own great grandparents and all the men and women and children who came here," he said. "The notion that somehow those who came through Ellis Island had all their papers right, and had checked every box and followed procedures as they were getting on the boat - they were looking for a better life, just like these families. And they want to earn their way into the American story."

Following the president's remarks, a group of immigration reform advocates echoed his message, urging swift passage of the bill.

"Every day that we wait is a day wasted and day that we've lost and day the economy won't grow," said Richard Trumka, the president of the AFL-CIO.

"It truly is both common sense and comprehensive," said Julian Castro, the mayor of San Antonio, Texas, of the legislation.

Meanwhile, prior to the Senate votes, Sen. Tim Kaine, D-Va., took to the Senate floor to push his colleagues to pass immigration reform and delivered his 15-minute speech entirely in Spanish.

Kaine, who's fluent in Spanish, said that even though he had to receive unanimous consent to deliver his remarks in Spanish on the floor, it was appropriate since the language "has been spoken in this country since Spanish missionaries founded St. Augustine, Fla., in 1565. Spanish is also spoken by almost 40 million Americans who have a lot at stake in the outcome of this debate," he said according to an English translation of his speech.