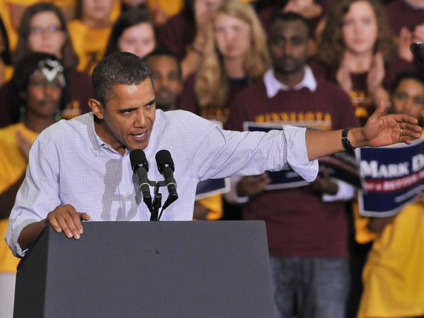 After House Minority Leader John Boehner chided him for using the term "enemies"in a conversation last week with Univision Radio, President Obama offered an explication for his remark in an interview today with talk radio host Michael Baisden.

Following is Mr. Obama's "enemies" quote from the Univision interview:

"If Latinos sit out the election instead of saying, 'We're gonna punish our enemies, and we're gonna reward our friends who stand with us on issues that are important to us' -- if they don't see that kind of upsurge in voting in this election -- then I think it's going to be harder. And that's why I think it's so important that people focus on voting on November 2nd."

Here is what Boehner said about Mr. Obama's use of the word "enemies" in prepared remarks for a speech Monday night.

"Ladies and gentlemen, we have a president in the White House who referred to Americans who disagree with him as 'our enemies.' Think about that. He actually used that word. When Ronald Reagan, George Bush, Bill Clinton, and George W. Bush used the word 'enemy,' they reserved it for global terrorists and foreign dictators -- enemies of the United States. Enemies of freedom. Enemies of our country. Today, sadly, we have president who uses the word 'enemy' for fellow Americans -- fellow citizens. He uses it for people who disagree with his agenda of bigger government -- people speaking out for a smaller, more accountable government that respects freedom and allows small businesses to create jobs. Mr. President, there's a word for people who have the audacity to speak up in defense of freedom, the Constitution, and the values of limited government that made our country great. We don't call them 'enemies.' We call them 'patriots.'"

Mr. Obama told Baisden that he should have used the word, "opponents," rather than "enemies" (see below). According to his language parsing, presumably some Republicans candidates are "opponents," not "enemies," of provisions, such as comprehensive immigration reform. Understood?

"And you know, it's interesting right now, there was a -- I had a conversation with a Hispanic radio outlet, Univision, and during the course of that conversation, one of the things that I had to say to the Latino community, which is frustrated that we haven't seen progress on immigration reform, was that they can't sit out of this election. There were arguments being made that because Democrats hadn't gotten this done, that Latinos should vote against Democrats or just sit out the election."

"And I said, well, you can't punish your friends when -- the folks who've been supporting it. Now, I did also say if you're going to punish somebody, punish your enemies, and I probably should have used the word, "opponents" instead of enemies. Now the Republicans are saying that I'm calling them enemies. What I'm saying is you're an opponent of this particular provision, comprehensive immigration reform, which is something very different."