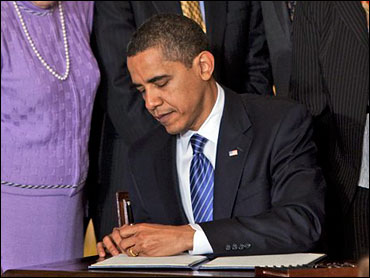 President Barack Obama said Monday he is allowing federal taxpayer dollars to fund significantly broader research on embryonic stem cells because "medical miracles do not happen simply by accident," and promised his administration would make up for the ground lost under his predecessor.

Fulfilling a campaign promise, Mr. Obama signed an executive order expected to set in motion increased research that supporters believe could uncover cures for serious ailments from diabetes to paralysis.

Mr. Bush limited the use of taxpayer money to only the 21 stem cell lines that had been produced before his decision. He argued he was defending human life because days-old embryos - although typically from fertility clinics and already destined for destruction - are destroyed to create the stem cell lines.

The Obama order reverses that without addressing a separate legislative ban, which precludes any federal money paying for the development of stem cell lines. The legislation, however, does not prevent funds for research on those lines created without federal funding. (Read more about what this Executive Order will do -- and won't do.)

Researchers say the newer lines created with private money during the period of the Bush ban are healthier and better suited to creating treatment for diseases. Embryonic stem cells are master cells that can morph into any cell of the body. Scientists hope to harness them so they can create replacement tissues to treat a variety of diseases - such as new insulin-producing cells for diabetics, cells that could help those with Parkinson's disease or maybe even Alzheimer's, or new nerve connections to restore movement after spinal injury.

Mr. Obama called his decision a "difficult and delicate balance," an understatement of the intense emotions generated on both sides of the long, contentious debate. He said he came down on the side of the "majority of Americans" who support increased federal funding for the research, both because strict oversight would prevent problems and because of the great and lifesaving potential it holds.

CBS News polling on the topic shows that Americans do support medical research using embryonic stem cells. In 2007, the last time CBS News asked the question, sixty-five percent said they approved compared to twenty-five percent who disapproved. The number of those who approved had gone up steadily since the 2004 when fifty percent approved. (Read more about the polling.)

"Rather than furthering discovery, our government has forced what I believe is a false choice between sound science and moral values," Mr. Obama said. "In this case, I believe the two are not inconsistent. As a person of faith, I believe we are called to care for each other and work to ease human suffering. I believe we have been given the capacity and will to pursue this research and the humanity and conscience to do so responsibly." (Read all of Mr. Obama's remarks.)

Mr. Obama warned against overstating the eventual benefits of the research. But he said his administration "will vigorously support scientists who pursue this research," taking a slap at his predecessor in the process.

It's a matter of competitive advantage globally as well, the president argued.

"When government fails to make these investments, opportunities are missed. Promising avenues go unexplored. Some of our best scientists leave for other countries that will sponsor their work. And those countries may surge ahead of ours in the advances that transform our lives," Mr. Obama said.

Early Show medical contributor Dr. Holly Phillips pointed out that such research was never banned or illegal. "The question that we're addressing today is what role, if any, federal funding should have" in this research.

"Many scientists for the last eight years have been complaining that they're spending more time trying to find funding for their research than actually doing their research. So for them this will really have a profound effect," Phillips said. "Certainly on an international level in medicine we're so excited about this research and the potential for healing that it has. So I think less red tape will have a profound effect."

Of the diseases or conditions that may be most affected by the end of the federal ban, Phillips said, "People are most excited about the neurological illnesses, things like Parkinson's and Alzheimer's. A group in California will start using embryonic stem cells in humans to hopefully cure spinal cell injuries for people who have been paralyzed from the waist down. We're also seeing some hope in treating diabetes, heart disease and even strokes. So really, millions of people could be affected by this research."

"We've got eight years of science to make up for," said Dr. Curt Civin, whose research allowed scientists to isolate stem cells and who now serves as the founding director of the University of Maryland School of Medicine's Center for Stem Cell Biology and Regenerative Medicine. "Now the silly restrictions are lifted."

Mr. Bush and his supporters said they were defending human life; days-old embryos - typically from fertility-clinic leftovers otherwise destined to be thrown away - are destroyed for the stem cells.

Family Research Council, which advocates for a "Judeo-Christian worldview" and warns against the reproductive cloning of a human being, opposes the use of embryonic stem cells, promoting instead adult stem cells as being superior.

Of Mr. Obama's new order, FRC's Dr. David Prentice told CBS' The Early Show, "In terms of scientific advances I don't think we are going to see anything for this. This is more of an ideological move."

House Republican Leader John Boehner said the president's repeal of the ban, "runs counter to President Obama's promise to be a president for all Americans. For a third time in his young presidency, the president has rolled back important protections for innocent life, further dividing our nation at a time when we need greater unity to tackle the challenges before us." (Read more about Republican reaction to the move.)

The president was insistent that his order would not open the door to human cloning.

"We will develop strict guidelines, which we will rigorously enforce, because we cannot ever tolerate misuse or abuse," Mr. Obama said. "And we will ensure that our government never opens the door to the use of cloning for human reproduction. It is dangerous, profoundly wrong, and has no place in our society, or any society."

Mr. Obama also issued a memo promising to restore "scientific integrity to government decision-making." That policy change was aimed more broadly than the stem cell debate, to reach into areas such as climate change as well.

"Promoting science isn't just about providing resources it is also about protecting free and open inquiry," Mr. Obama said. "It is about letting scientists like those here today do their jobs, free from manipulation or coercion, and listening to what they tell us, even when it's inconvenient especially when it's inconvenient. It is about ensuring that scientific data is never distorted or concealed to serve a political agenda and that we make scientific decisions based on facts, not ideology.

Mr. Obama said the presidential memorandum was the beginning of a process that would ensure that his administration: bases its decision "on the soundest science," appoints scientific advisers based on their credentials and experience, not their politics or ideology, and is "open and honest" about the science behind its decisions.

"We view what happened with stem cell research in the last administration is one manifestation of failure to think carefully about how federal support of science and the use of scientific advice occurs," said Harold Varmus, chairman of the White House's Council of Advisers on Science and Technology.