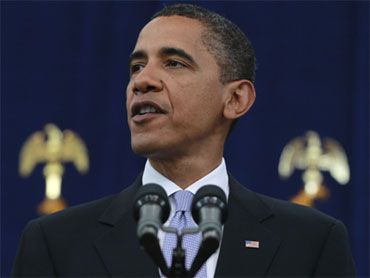 Seizing on a disastrous oil spill to advance a cause, President Barack Obama on Wednesday called on Congress to roll back billions of dollars in tax breaks for oil and pass a clean-energy bill that he says would help the nation end its dependence on fossil fuels.

Obama predicted that he would find the political support for legislation that would dramatically alter the way Americans fuel their homes and cars, including placing a price on carbon pollution, even though such legislation is politically divisive and remains bogged in the Senate.

"The votes may not be there right now, but I intend to find them in the coming months," Obama told an audience at Carnegie Mellon University. "I will continue to make the case for a clean energy future wherever and whenever I can, and I will work with anyone to get this done. And we will get it done."

Obama said the country's continuing dependence on fossil fuels "will jeopardize our national security, it will smother our planet and will continue to put our economy and our environment at risk."

The president spoke as Americans remain deeply frustrated by the worst oil spill in the nation's history, which is still spewing crude in the Gulf of Mexico more than a month after a BP drilling rig sank. He sought anew to connect to that public angst while promising that "we're waging this battle every minute of every day" to plug the gushing oil well deep below the sea's surface.

The proposal to roll back oil company tax breaks is something Obama has discussed in the past, and included in his most recent budget proposal, but it's not been a talking point of late. Now with the spill casting Big Oil in the worst possible light, calling for the elimination of oil company subsidies is one more way for Obama to show the public he wants to hold the industry accountable.

"The time has come, once and for all, for this nation to fully embrace a clean energy future," the president said.

That means improving energy efficiency, tapping natural gas reserves, pursuing nuclear power "and it means rolling back billions of dollars in tax breaks to oil companies so we can prioritize investments in clean energy research and development."

Obama said that the Gulf spill "may prove to be a result of human error - or corporations taking dangerous shortcuts that compromised safety" - but that deepwater drilling is inherently risky and the U.S. cannot rely solely on fossil fuels.

Obama also used the speech to lash out at Republicans with partisan rhetoric, saying they have mostly "sat on the sidelines and shouted from the bleachers" as he's tried to restore the economy.

The Republican Party, Obama said, has fought him on tax cuts for small businesses, tax credits for college tuition, new spending on clean energy and more.

The timing comes as Obama, juggling the oil-spill disaster in the Gulf and mounting foreign crises, tried to assure the country that he is also working on the people's chief concern - the economy. The president's political speech also underscores the importance of the upcoming midterm elections, in which the outcome of House and Senate races could shape Obama's ability to enact his agenda for the rest of his term.

The president said that as the election approaches, he expects Republicans to make the same economic argument they have for decades.

He described that as giving tax cut to millionaires "who didn't need them," gutting regulations and putting industry insiders in charge of oversight, as well as shortchanging investment in research.

"To be fair, a good deal of the other party's opposition to our agenda has also been rooted in their sincere and fundamental belief about government," Obama said. "It's a belief that government has little or no role to play in helping this nation meet its collective challenges."