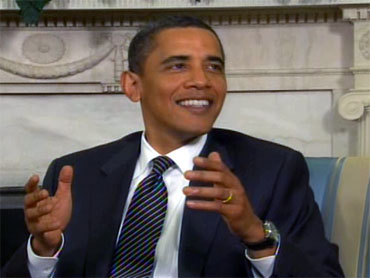 President Barack Obama said he expects Friday's report on the nation's gross domestic product to show the economy contracted during the second quarter of the year but that the United States has, in his words, "stepped away from the precipice."

Obama told reporters on Thursday that he has not seen the GDP report but expects it to reflect that the economic struggle continues. He said most economists agree that the economy is still slowing down, but that the pace of the slowdown is not as quick as analysts have seen in recent reports.

Many analysts predict that the economy shrank at an annual rate of 1.5 percent from April through June. If they are right, it would mark a vast improvement from the 5.9 percent average annualized drop recorded in the prior six months - the weakest performance in 50 years.

Obama said there are reasons to remain upbeat. Job losses have slowed from the pace he faced in January when he took office. He also said the credit and banking systems have settled down. And he said housing prices are on the rise for the first time in three years.

"All of this is a sign that we have stepped away from the precipice," Obama said, adding there are no longer fears of another Great Depression.

Obama added, though, that job losses are still too high. "You don't have to read GDP numbers to see that," he told reporters after meeting in the Oval Office with Philippines President Gloria Macapagal-Arroyo.