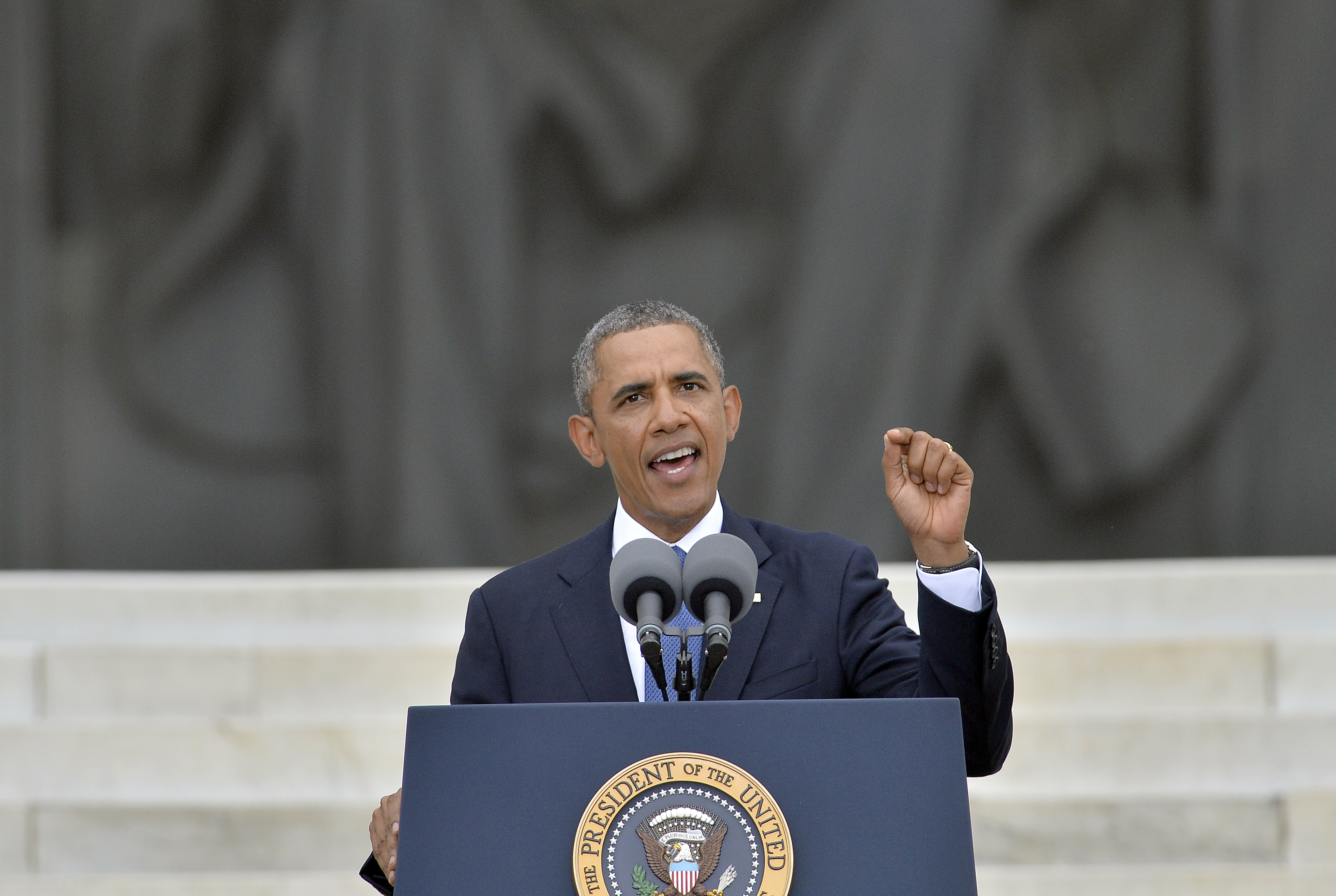 Paying tribute to Martin Luther King, Jr. and the participants of the 1960s civil rights movement on the 50th anniversary of the March on Washington, President Obama on Wednesday called on America to come together to address the "great unfinished business" of the March, achieving economic justice.

"The men and women who gathered 50 years ago were not there in search of some abstract idea," Mr. Obama said from the steps of the Lincoln Memorial, where King stood 50 years before him. "They were there seeking jobs as well as justice. Not just the absence of oppression, but the presence of economic opportunity. For what does it profit a man, Dr. King would ask, to sit at an integrated lunch counter if he can't afford the meal?"

The president called on the nation to find the courage to come together "for good jobs and just wages... from the corners of Anacostia to the hills of Appalachia."

"We might not face the same dangers of 1963, but the fierce urgency of now remains," he said. "No one can match King's brilliance, but the same flame that lit the heart of all who are willing to take a first step for justice, I know that flame remains."

Mr. Obama acknowledged the debt that he and all Americans owe to the civil rights activists who led the March, remarking that Medgar Evers, James Chaney, Andrew Goodman, Michael Schwerner and Martin Luther King, Jr. did not die in vain.

To dismiss the progress they helped spark, he said, "to suggest, as some sometimes do that little has changed, that dishonors the courage and the sacrifice of those who paid the price to march in those years... But we would dishonor those heroes as well to suggest that the work of this nation is somehow complete. The arc of the moral universe may bend toward justice, but it doesn't bend on its own."

In some ways, Mr. Obama said, the victories of the civil rights movement may have obscured the March's economic goals.

"Yes, there have been examples of success within black America that would have been unimaginable a half-century ago," he said. "But as has already been noted, black unemployment has remained almost twice as high as white employment, Latino unemployment close behind... The test was not and never has been whether the doors of opportunity are cracked a bit wider for a few. It's whether our economic system provides a fair shot for the many, for the black custodian and the white steel worker, the immigrant dishwasher and the Native American veteran."

The president acknowledged the societal changes that have stymied economic progress, from technological development that has reshaped the economy and the work of special interests to destructive racial politics.

"But the good news is, just as was true in 1963, we now have a choice," he said. "We can continue down our current path in which the gears of this great democracy grind to a halt and our children accept a life of lower expectations... Or we can have the courage to change. The march on Washington teaches us that we are not trapped by the mistakes of history."

Change doesn't come from Washington, he said, but "has always been built on our willingness -- we, the people -- to take on the mantle of citizenship, you are marching."