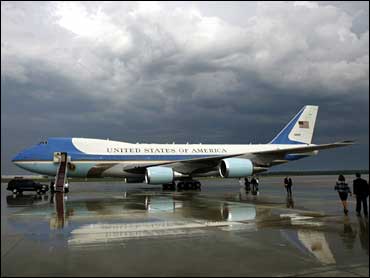 (AP Photo/Jose Luis Magana, File)
It happens every time a president leaves town to make an Earth Day speech. Reporters scramble to point out how much fuel was expended so the President could talk about conserving energy and using alternative fuels.

In flying to and from Iowa today, President Obama took two flights on Air Force One and four on Marine One.

The press office at Andrews AFB wouldn't give me the fuel consumption numbers for the 747 that serves as Air Force One without the approval of the White House Press Office, which as I write this has yet to be given.

But Boeing says its 747 burns about 5 gallons of fuel per mile. It's 895 miles from Washington to Des Moines, so a round trip brings the fuel consumption for the fixed-wing portion of the President's trip to 8,950 gallons.

(AP)
The trip also put President Obama on Marine One for round-trip flights between the White House and Andrews AFB and between Des Moines International Airport and Newton, Iowa, site of his Earth Day speech. It totaled about an hour of flight time. The VH-3D that serves as Marine One consumes about 1200 pounds of fuel per hour which comes out to about 166 gallons consumed flying the President today.

Not included in these calculations are the presidential vehicles that took him the short distance from the landing zone in Newton to the event site at the Trinity Structural Towers Manufacturing Plant.

In his speech there, President Obama called for a "new era of energy exploration in America."

At a plant that manufactures the towers for wind turbines, he urged Americans to support his plan for promoting expanded use of alternative and renewable fuels.

And he announced that for the first time, the Interior Department would be leasing federal waters for projects to generate electricity from wind and ocean currents.

President Obama could have saved at least 9,116 gallons of fuel by giving his speech at the White House - but no wind turbines are manufactured here.