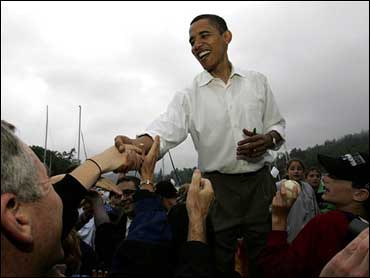 Democratic presidential hopeful Barack Obama said Thursday the United States cannot use its military to solve humanitarian problems and that preventing a potential genocide in Iraq isn't a good enough reason to keep U.S. forces there.

"Well, look, if that's the criteria by which we are making decisions on the deployment of U.S. forces, then by that argument you would have 300,000 troops in the Congo right now — where millions have been slaughtered as a consequence of ethnic strife — which we haven't done," Obama said in an interview with The Associated Press.

"We would be deploying unilaterally and occupying the Sudan, which we haven't done. Those of us who care about Darfur don't think it would be a good idea," he said.

Obama, a first-term senator from Illinois, said it's likely there would be increased bloodshed if U.S. forces left Iraq.

"Nobody is proposing we leave precipitously. There are still going to be U.S. forces in the region that could intercede, with an international force, on an emergency basis," Obama said between stops on the first of two days scheduled on the New Hampshire campaign trail. "There's no doubt there are risks of increased bloodshed in Iraq without a continuing U.S. presence there."

The greater risk is staying in Iraq, Obama said.

"It is my assessment that those risks are even greater if we continue to occupy Iraq and serve as a magnate for not only terrorist activity but also irresponsible behavior by Iraqi factions," he said.

The senator has been a fierce critic of the war in Iraq, speaking out against it even before he was elected to his post in 2004. He was among the senators who tried unsuccessfully earlier this week to force President Bush's hand and begin to limit the role of U.S. forces there.

"We have not lost a military battle in Iraq. So when people say if we leave, we will lose, they're asking the wrong question," he said. "We cannot achieve a stable Iraq with a military. We could be fighting there for the next decade."

Obama said the answer to Iraq — and other civil conflicts — lies in diplomacy.

"When you have civil conflict like this, military efforts and protective forces can play an important role, especially if they're under an international mandate as opposed to simply a U.S. mandate. But you can't solve the underlying problem at the end of a barrel of a gun," he said. "There's got to be a deliberate and constant diplomatic effort to get the various factions to recognize that they are better off arriving at a peaceful resolution of their conflicts."

The Republican National Committee accused Obama of changing his position on the war.

"Barack Obama can't seem to make up his mind," said Amber Wilkerson, an RNC spokeswoman. "First he says that a quick withdrawal from Iraq would be 'a slap in the face' to the troops, and then he votes to cut funding for our soldiers who are still in harm's way. Americans are looking for principled leadership — not a rookie politician who is pandering to the left wing of his party in an attempt to win an election."

Obama, who has expressed reservations about capital punishment but does not oppose it, said he would support the death penalty for Osama bin Laden, the mastermind of the Sept. 11 attacks.

"The first thing I'd support is his capture, which is something this administration has proved incapable of achieving," Obama said. "I would then, as president, order a trial that observed international standards of due process. At that point, do I think that somebody who killed 3,000 Americans qualifies as someone who has perpetrated heinous crimes, and would qualify for the death penalty. Then yes."

In response to criticism from Republican Mitt Romney, Obama said the former Massachusetts governor was only trying to "score cheap political points" when he told a Colorado audience that Obama wanted sex education for kindergartners.

"All I said was that I support the same laws that exist in Massachusetts and New Hampshire, in which local communities and parents can make decisions to provide children with the information they need to deal with sexual predators," Obama said.

Romney on Wednesday targeted Obama for supporting a bill during his term in the Illinois state Senate that would have, among other things, provided age-appropriate sex education for all students.

"How much sex education is age appropriate for a 5-year-old? In my mind, zero is the right number," Romney said.

Obama said Romney was wrong to take the shot and incorrect on its basis.

"We have to deal with a coarsening of the culture and the over-sexualization of our young people. Look, I've got two daughters, 9 and 6 years old," Obama told the AP. "Of course, part of the coarsening of that culture is when politicians try to demagogue issues to score cheap political points."

Romney himself once indicated support for similar programs that Obama supports.

In 2002, Romney told Planned Parenthood in a questionnaire that he also supported age-appropriate sex education. He checked yes to a question that asked: "Do you support the teaching of responsible, age-appropriate, factually accurate health and sexuality education, including information about both abstinence and contraception, in public schools?"