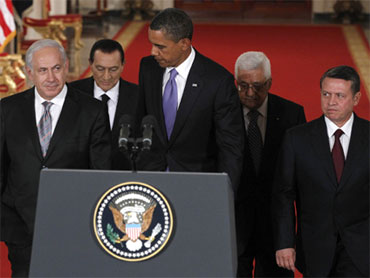 President Barack Obama convened the first direct Israeli-Palestinian talks in two years Wednesday, challenging Mideast leaders to seize a fleeting opportunity to settle their differences and deliver peace to a region haunted by decades of hostility.

"Do we have the wisdom and the courage to walk the path of peace?" Obama asked, with the leaders of Jordan, Egypt, Israel and the Palestinians beside him in the crowded East Room of the White House. Earlier Obama had met with each individually, and they were gathering afterward for dinner.

In turn, each of the leaders spoke of his hopes for a breakthrough, with the U.S. playing the role of peace broker.

Israeli Prime Minister Benjamin Netanyahu said Israelis seek a lasting peace, not an interlude between wars. He called Palestinian President Mahmoud Abbas "my partner in peace," and said he came to Washington in search of an enduring agreement. "I came here today to make peace. Everybody loses if there is no peace."

Said Jordan's King Abdullah II: "Mr. President, we need your support as a mediator, honest broker and a partner. If hopes are disappointed again, the price of failure will be too high for all."

CBS News White House correspondent Bill Plante reports that the four main issues separating Israel and the Palestinians have been the same for decades:

Now there is hope. Cooperation between Israel and the Palestinian Authority has been improving. For nine months, there's been a halt to Israeli settlement construction but that moratorium expires on September 26. Unless there is a compromise to extend it, the talks could fail before they really begin.