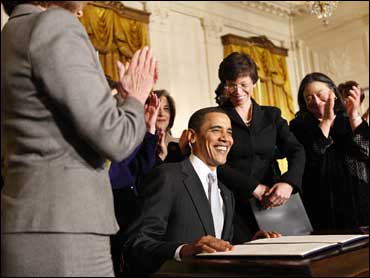 (AP)
President Obama this afternoon signed an executive order to create a White House Council on Women and Girls.

The council is designed "to ensure that all Cabinet and Cabinet-level agencies consider how their policies and programs impact women and families," the White House said in a statement.

(CBS)
The president said that the council, which will be chaired by senior Obama adviser Valerie Jarrett, was created to ensure that women and girls are treated fairly in all aspects of public policy.

First lady Michelle Obama and House Speaker Nancy Pelosi were among those who joined Jarrett and President Obama at an early afternoon ceremony announcing the creation of the council.

In his remarks, Mr. Obama discussed the challenges faced by the women in his life.

He said he has watched his wife "juggling work and parenting with more skill and grace than anybody I know," but that the challenges inherent in doing so "tore at her at times."

The president also talked about the obstacles faced by his grandmother and his mother, who "struggled to raise me and my sister on her own, worrying about how she'd pay the bills and educate herself and provide for us."

The president discussed inequalities between men and women, noting that "women still earn just 78 cents for every dollar men make" and pointing out that women are underrepresented at the highest levels of business and government.

He added that government should "ensure that we all have the chance to pursue our own version of happiness" and said that "when any of our citizens cannot fulfill their potential because of factors that have nothing to do with their talent, their character, their work ethic, that says something about the state of our democracy."

Before the president spoke, Jarrett said that the council "will provide a coordinated federal response to many of the challenges faced by women and girls." She told an appreciative audience made largely of women that "today is really about creating opportunities."

According to Politico, the creation of the panel "appears to fall short of what some women's groups were seeking" because it lacks Cabinet rank or a permanent office with a staff fully devoted to women's issues.