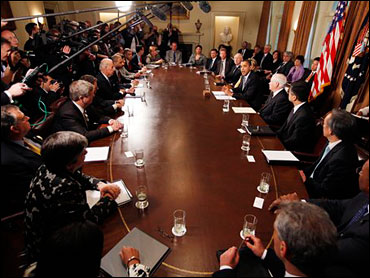 President Barack Obama on Monday ordered his Cabinet to find ways to slice spending by $100 million, but acknowledged it's a "drop in the bucket" and said there's a "confidence gap" that he needs to overcome.

Just back from a Latin America summit, Mr. Obama told the first formal Cabinet meeting of his administration that vast spending to combat the economic crisis was "the right thing to do." But he also said taxpayers still need to know that every dollar they give the government is being spent wisely.

"We also have a deficit - a confidence gap - when it comes to the American people," he told reporters. "And we've got to earn their trust."

Mr. Obama said the $100 million would come from "efficiencies" in agency operations, and would be in addition to future cuts in programs that aren't working.

Yet the red ink in the annual budget is currently in the hundreds of billions. He was asked if the efficiency saving isn't just "a drop in the bucket".

"It is," he replied. "None of these things alone are going to make a difference. But cumulatively, they make an extraordinary difference because they start setting a tone ... $100 million there, $100 million here - pretty soon, even here in Washington, it adds up to real money."

The federal deficit for March alone was $192.3 billion, and $100 million would represent a minuscule portion of that sum, roughly one-twentieth of 1 percent. Mr. Obama in February brought forward a $3.6 trillion budget for the 2010 fiscal year, beginning Oct. 1, a proposal that would produce $9.3 trillion in deficits over the next decade.

Senate Republican leader Mitch McConnell said he applauded all attempts to cut government spending but insisted that a $100 million cut would only cover one day's interest on Obama's $787 billion stimulus spending plan.

White House spokesman Robert Gibbs said later that the cuts were part of a larger cost-cutting effort by Mr. Obama. He said the president "has laid out cuts large and small in administrative costs" and in programs throughout the government.

Asked to elaborate on what Mr. Obama meant by citing a "confidence gap," Gibbs told reporters:

"He knows and the American people know that continuing to run up deficits ... and to continue to have those expand year after year after year is unsustainable. Despite much derision, that's why the president is seeking cuts both large and small. That's why the president has undertaken greater transparency as it relates to spending and hte stimulus and I think the president overall wants to give the American people assurance that the government can use the money from them wisely."

Earlier this month, both the House and Senate passed companion budget plans giving Mr. Obama and his Capitol Hill allies a key victory, but 20 House Democrats from GOP-leaning areas abandoned him on the final vote because of unhappiness over deficits.

The Cabinet meeting came just days after a series of "Tea Party" demonstrations across the country in which protesters challenged the administration over it's massive spending to help pull the country and its financial system out of an economic nose dive unseen in decades.

Even among budget cuts cited in a newly released White House summary, a considerable proportion of the savings would occur over a period of years.

It pointed out projected cuts in office supplies and computer software at the Department of Homeland Services, for instance, noting that the agency spends $100 million a year on this "but virtually none of the supplies are purchased through agreements that leverage the department's collective buying power."

Thus, it said, DHS estimates that it could save up to $51 million over five years by purchasing in bulk.

It said that $62 million could be saved over a 15-year lease term if the Agriculture Department were to combine roughly 1,500 employees from seven leased locations into a single facility by early 2011.

The White House summary also said that $6.7 million could be saved over the first five years by having U.S. attorney offices and the U.S. Marshals Offices' Asset Forfeiture program convert publication of forfeiture notices from newspapers to the Internet.

The worksheet also said that $5 million a year could be saved by consolidating embassy posts at the State Department and U.S. Agency for International Development.