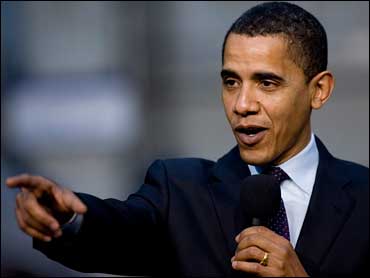 Democratic presidential candidate Barack Obama on Friday denounced inflammatory remarks from his pastor, who has railed against the United States and accused its leaders of bringing on the Sept. 11 attacks by spreading terrorism.

As video of the Rev. Jeremiah Wright has widely aired on television and the Internet, Obama responded by posting a blog about his relationship with Wright and his church, Chicago's Trinity United Church of Christ, on the Huffington Post.

Obama wrote that he's looked to Wright for spiritual advice, not political guidance, and he's been pained and angered to learn of some of his pastor's comments for which he had not been present. Obama's statement did not say whether Wright would remain on his African American Religious Leadership Committee, and campaign officials wouldn't say either.

"I categorically denounce any statement that disparages our great country or serves to divide us from our allies," Obama said. "I also believe that words that degrade individuals have no place in our public dialogue, whether it's on the campaign stump or in the pulpit. In sum, I reject outright the statements by Reverend Wright that are at issue."

In a sermon on the Sunday after the terrorist attacks on Sept. 11, 2001, Wright suggested the United States brought on the attacks.

"We bombed Hiroshima, we bombed Nagasaki, and we nuked far more than the thousands in New York and the Pentagon, and we never batted an eye," Wright said. "We have supported state terrorism against the Palestinians and black South Africans, and now we are indignant because the stuff we have done overseas is now brought right back to our own front yards. America's chickens are coming home to roost."

In a 2003 sermon, he said blacks should condemn the United States.

He also gave a sermon in December comparing Obama to Jesus, promoting his candidacy and playing down Clinton.

Questions about Obama's religious beliefs have dogged him throughout his candidacy. He's had to fight against false Internet rumors suggesting he's really a Muslim intent on destroying the United States, and now his pastor's words uttered nearly seven years ago have become an issue.

Obama wrote on the Huffington Post that he never heard Wright say any of the statements that are "so contrary to my own life and beliefs," but they have raised legitimate questions about the nature of his relationship with the pastor and the church.

He explained that he joined Wright's church, Trinity United Church of Christ in Chicago, nearly 20 years ago.

Obama said he knew Wright as a former Marine and respected biblical scholar who lectured at seminaries across the country.

"Reverend Wright preached the gospel of Jesus, a gospel on which I base my life," he wrote. "... And the sermons I heard him preach always related to our obligation to love God and one another, to work on behalf of the poor, and to seek justice at every turn."

He said Wright's controversial statements first came to his attention at the beginning of his presidential campaign last year, and he condemned them. Because of his ties to the 6,000-member church, Obama decided not to leave the congregation.

Obama also has credited Wright with delivering a sermon that he adopted as the title of his book, "The Audacity of Hope."

"With Reverend Wright's retirement and the ascension of my new pastor, Rev. Otis Moss, III, Michelle and I look forward to continuing a relationship with a church that has done so much good," he wrote.

Also Friday, the United Church of Christ issued a 1,400-word statement defending Wright and his "flagship" congregation. John H. Thomas, United Church of Christ's president, lauded Wright's church for its community service and work to nurture youth. Other church leaders praised Wright for speaking out against homophobia and sexism in the black community.

"It's time for all of us to say no to these attacks and to declare that we will not allow anyone to undermine or destroy the ministries of any of our congregations in order to serve their own narrow political or ideological ends," Thomas said in the statement.