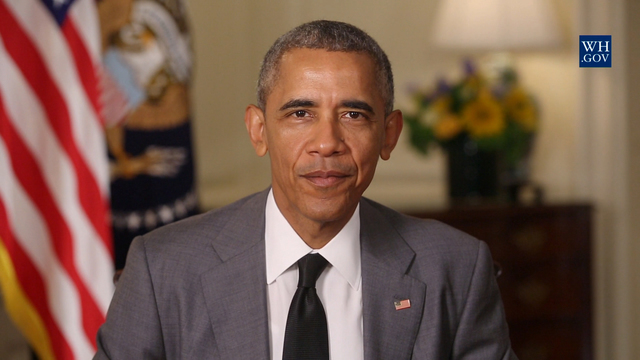 President Obama is commemorating the 100th anniversary of the National Park Service in a new video, highlighting his commitment to conservation and touting his own administration’s past efforts in protecting public lands and waters.

“From Glacier and Denali to Gettysburg and Seneca Falls, our more than 400 parks and other sites capture our history and our sense of wonder,” the president said in a video released Saturday. “All across the country, the National Park Service is preparing for a big year. We’re revitalizing a grove of giant Sequoias in Yosemite; repairing the Lincoln Memorial; and enhancing the iconic entrance to our first national park at Yellowstone.”

Mr. Obama encouraged Americans to get a taste for themselves what the protected national lands had to offer, suggesting everyone “Find Your Park” -- part of a new initiative by the National Parks Centennial Celebration to connect people with parks.

He said he was “proud” of the work his administration had done on the conservation front, noting that they have “protected more than 265 million acres of public lands and waters -- more than any administration in history.”

“We’ve recovered endangered wildlife species and restored vulnerable ecosystems. We’ve designated new monuments to Cesar Chavez in California, the Pullman porters in Chicago, and the folks who stood up for equality at Stonewall in New York – to better reflect the full history of our nation,” Mr. Obama said.

But he cautioned that the U.S. still had “more work to do to preserve our lands, culture, and history,” emphasizing the dangers that climate change still posed.

“As we look ahead, the threat of climate change means that protecting our public lands and waters is more important than ever,” he said. “Rising temperatures could mean no more glaciers in Glacier National Park. No more Joshua Trees in Joshua Tree National Park. Rising seas could destroy vital ecosystems in the Everglades, even threaten Ellis Island and the Statue of Liberty.”

“So in the coming years and decades, we have to have the foresight, and the faith in our future, to do what it takes to protect our parks and protect our planet for generations to come. Because these parks belong to all of us. And they’re worth celebrating – not just this year, but every year.”

Republicans, for their part, discussed their national security agenda for the U.S. House in a new video out while Congress is in recess.

“It also requires the federal government to work with technology experts and bring together the best minds in one room to find ways to combat cyberthreats,” the California Republican said.

Slamming the president’s foreign policy for leaving a “power vacuum” in the Middle East, Walters also charged Mr. Obama with having “not done enough to take on ISIS.”

“You add all of this up, and what do you see? All across the world, our enemies don’t fear us, and our friends don’t trust us,” she said. “To say this foreign policy is not making us any safer is, well, an understatement.”

“President Reagan famously called for ‘peace through strength.’ That is still the case today,” she said. “America will be safe only when we are strong. And I believe our plan will accomplish just that.”