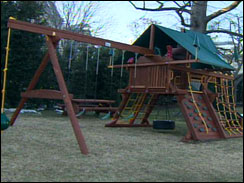 (CBS)
As President Obama walked Brazilian President Luiz Inacio Lula da Silva to his limousine after their two-hour meeting in the Oval Office Saturday, the leaders passed the latest addition to the White House landscape: the "Supersized Rainbow Castle" play set installed for the Obama daughters.

Displaying the discipline one expects of chiefs of state, both leaders resisted the temptation to try out the swings, the rock wall, or the super scoop slide or to climb the rope ladder into the tented clubhouse on top.

However, it appeared from his gestures that Mr. Obama was talking to Lula about the 13-by-27 foot play set built of cedar and redwood. And his pride in the little playground became evident a few moments later.

"This is pretty spectacular," he said of the playground, sounding very much like a proud father. He and the first lady presented it to Malia, 10, and Sasha, 7, last Wednesday. It was a gift designed to make the austere and even foreboding nature of the White House grounds more of a home for two young girls. And we were told the girls squealed with delight at first sight — and ran to play on it.

Asked if he had yet tried out the swings for himself, the president said no. "But I've pushed them on the swings," he said.

It was then that he offered up his redistribution of swing time proposal.

"We're gonna make sure that not just Malia and Sasha — but the whole staff — they can bring their kids. If reporters got kids, they can play on it too."

That brought squeals of delight from some members of the press – with visions of their youngsters playing with the first daughters a few steps from the Oval Office.

That's one way to get the swing vote.

Maybe he'll let those of us without kids use Air Force One instead.