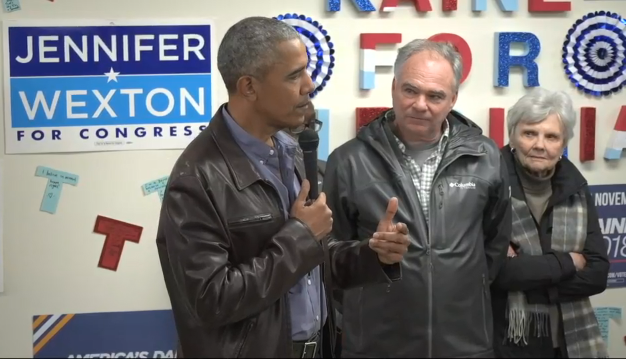 The president surprised campaign volunteers in Fairfax, Virginia with an appearance and a box of donuts. He called Wexton "part of this remarkable wave of candidates running across the country," and quipped, "Lord knows we need more women in charge."

Obama reminded the campaign workers that he, like Wexton, had also been a state senator, which he called "great training" for Congress.

"You remind me of me when I was your age," Obama told the young campaign workers, and he recalled that he had been "kind of a goof-off until my junior year," when he recognized that there was more to life. It seemed, he said, "like the people I respect live their lives for some larger purpose."

He said he didn't know at the time what that path would be, but he had to "hitch my wagon to something larger than myself."

The former president has been appearing at rallies in recent weeks for gubernatorial, House and Senate Democrats across the country, leading up to Election Day.