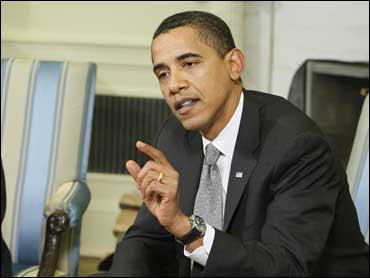 President Obama today called such bonuses "shameful," deeming them "the height of irresponsibility."

As the New York Times reported, last year's bonus payout marked the sixth largest such payout ever; while it was a smaller total than over the previous few years – the total paid out in bonuses fell 44 percent from 2007 – it roughly matched the bonus totals in 2004, when the Dow Jones Industrial Average was above 10,000.

It is reportedly "unclear" if taxpayer money helped fund the bonuses.

At a meeting with Treasury Secretary Timothy Geithner this afternoon, Mr. Obama was harshly critical of the bonuses.

When "they are asking for taxpayers to help sustain them, and when taxpayers find themselves in the difficult position that if they don't provide help, that the entire system could come down on top of our heads, that is the height of responsibility," the president said. "It is shameful."

"And part of what we're going to need is for the folks on Wall Street, who are asking for help, to show some restraint, and show some disciple, and show some sense of responsibility," he continued. "The American people understand that we've got a big hole that we've got to dig ourselves out of, but they don't like the idea that people are digging a bigger hole even as they're bing asked to fill it up."

The president promised further conversations with Wall Street "to underscore that they have to start acting in a more responsible fashion if we are to together get this economy rolling again."