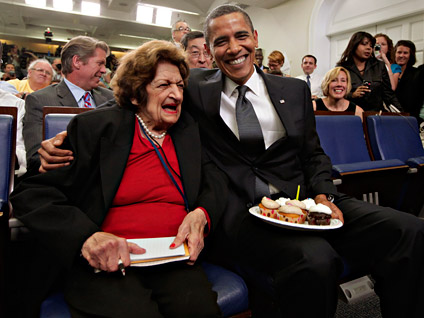 Journalist Helen Thomas' recent remarks about Jews in Israel were "offensive," President Obama said in an interview that aired this morning.

The 89-year-old White House correspondent retired yesterday after coming under scrutiny for saying that Jews in Israel should "get the hell out of Palestine" and "go home" to Germany and Poland.

Mr. Obama said on NBC's "Today Show" that Thomas' comments were "out of line" but added that it was a "shame" her long, much-celebrated career had to end in controversy. He called her retirement "the right decision."

Thomas had covered the White House since 1960 but served as a columnist for Hearst News Service for about the past decade. She was known as a trailblazer for women. As a columnist, she was also known for expressing her liberal views.

In the interview, the president also emphasized how seriously he took the oil spill in the Gulf of Mexico, remarking that if BP CEO Tony Hayward were working for him, he would have fired him by now. When asked by Matt Lauer if this was the time to "kick some butt," Mr. Obama said he's working with experts to address the oil spill and to find out "whose ass to kick."

Mr. Obama also weighed in on lighter issues like the botched umpire call that ruined Detroit Tigers pitcher Armando Galarraga's perfect baseball game last week. The umpire mistakenly called a baserunner safe in what would have been the final out of a game in which no runners made it on base.

The incident puts the spotlight on whether Major League Baseball should "take a look" at its instant replay policy, the president said, but he said Commissioner Bud Selig "made the right call" in not awarding a perfect game after the fact.