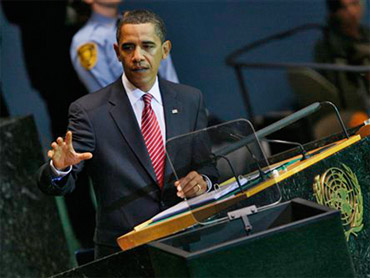 President Barack Obama exhorted world leaders on Wednesday to step up and do their part in tackling global challenges in promoting security and prosperity rather than waiting for America to do it alone.

"The people of the world want change," Obama said in his first address to the U.N. General Assembly. "They will not long tolerate those who are on the wrong side of history." (Read Obama's remarks in full)

While Obama continues to be popular around the world, he has struggled with many international issues, including the war in Afghanistan, negotiating peace between Israelis and Palestinians and winning passage of climate change legislation ahead of a global conference in December.

The U.N. speech comes one day before Obama hosts a two-day meeting of the world's major economies in Pittsburgh, where he is likely to encounter resistance to his proposals aimed at correcting global imbalances that many believe contributed to the worldwide recession.

In an era where fast-moving technology binds people across borders and old divides, Obama called for "a new era of engagement based on mutual interest and mutual respect."

"The time has come to realize that the old habits, the old arguments, are irrelevant to the challenges faced by our people," he said."They lead nations to act in opposition to the very goals that they claim to pursue -- and to vote, often in this body, against the interests of their own people. They build up walls between us and the future that our people seek, and the time has come for those walls to come down."

Obama said he will never apologize for defending U.S. interests. But he sought to dispel what he said has become "an almost reflexive anti-Americanism" that has swept the globe.

To do so, Obama offered a litany of policy changes and actions his administration had undertaken during his first nine months in office, with the overarching message that the United States has no interest in a go-it-alone stance and instead wants to act as an equal partner with others on the world stage.

"Those who used to chastise America for acting alone in the world cannot now stand by and wait for America to solve the world's problems alone," Obama said in an address that carried a remarkably blunt tone.

"The time has come for the world to move in a new direction," Obama said. "Our work must begin now."

"In an era where our destiny is shared, power is no longer a zero-sum game," Obama said. "No world order that elevates one nation or group of people over another will succeed. That is the future America wants."

He spoke to a packed chamber at the United Nations, receiving applause when he entered from even the likes of Libyan leader Moammar Gadhafi. Iranian President Mahmoud Ahmadinejad did not join in the applause. Throughout Obama's remarks, the president received polite applause several times.

Obama called on fellow leaders to help bring about a nuclear weapons-free world, to increase security from terrorists and promote peace between Israelis and Palestinians, to tackle climate change and to create more economic opportunity.

He said that Iran and North Korea "must be held accountable" if they continue to put their pursuit of nuclear weapons ahead of international security.

"The world must stand together to demonstrate that international law is not an empty promise and that treaties will be enforced."

Obama has said the door is open to Iran to discuss the issue, but that U.S. patience is not limitless. He has taken the same position with respect to the reclusive communist regime in North Korea.

On the warming planet, he said "the danger posed by climate change cannot be denied - and our responsibility to meet it must not be deferred."

The president said "this is why the days when America dragged its feet on this issue are over." He said he understood the temptation of nations to put economic recovery from recession ahead of work to address climate change, but said that must not be allowed to happen.

Obama's speech is the centerpiece of a dizzying agenda that will also see him holding pivotal meetings with the new Japanese prime minister, Yukio Hatoyama, and Russian President Dmitry Medvedev.

He foreshadowed his message to world leaders in a speech Tuesday to the Clinton Global Initiative. He spoke of nations interconnected by problems, whether a flu strain or an economic collapse or a drug trade that crosses borders.

"Just as no nation can wall itself off from the world, no one nation - no matter how large, no matter how powerful - can meet these challenges alone," Obama said.

While that point is hardly new, it is sharper because of the political context. Obama follows Bush, who at times questioned the U.N.'s toughness and credibility, particularly in containing Iraq's Saddam Hussein. The U.S.-U.N. relationship wilted.

Obama's team is intent on drawing the contrast.

"The United States has dramatically changed the tone, the substance and the practice of our diplomacy at the United Nations," said Susan Rice, Obama's ambassador to the U.N.

But multilateralism has its limits, particularly as national interests collide.

Obama needs the sway of Russia and China in getting tougher U.N. action against Iran over its potential nuclear weapons program, and neither country is showing interest.

While other world leaders could push for Mideast peace, it was Obama who personally intervened in pulling together the Israeli and Palestinian leaders on Tuesday. He showed some impatience as both sides have been stalled over familiar issues.

Later, Obama was meeting with Medvedev. That session comes just days following Obama's decision to abruptly scrap a Bush-era missile defense plan in Eastern Europe that Russia deeply opposed, swapping it for a proposal the U.S. says better targets any launch by Iran.

Russian leaders rejoiced over Obama's move, but he dismissed any role Russia may have played and called it just a bonus if the country is now less "paranoid" about the U.S.