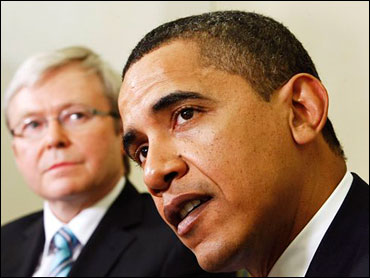 (AP Photo/Gerald Herbert)
President Obama today called for quick action on new regulations for financial institutions like AIG that would allow the government to take them over in order to avoid collapse of the financial system.

"I hope it doesn't take too long to convince Congress," Mr. Obama said. "Right now we do not have resolution authority for a non-bank institution like AIG that is comparable to what we have for banks that get into trouble using the FDIC."

The administration's plan was unveiled by Treasury Secretary Tim Geithner during a hearing on Capitol Hill today.

"We are already hard at work in putting forward a detailed proposal," Mr. Obama added. "We will work in consultation with members of Congress. That will be just one phase of a broader regulatory framework that we're going to have to put in place to prevent these kinds of crises from happening again."

Mr. Obama made his comments after an Oval Office meeting with Australian Prime Minister Kevin Rudd. Mr. Obama said they spent the majority of their discussion talking about the global economy.

"A global recession requires a global solution. And that's why so much of our discussion today focused on common actions we need to take together at the upcoming G-20 summit in London," Rudd said. "I think the actions taken by the U.S. administration and the statement yesterday by Treasury Secretary Geithner on impaired asset management is an important step in the overall road to global economic recovery."

"What I shared with Prime Minister Rudd is something that I think the Australian people understand, just as the American people understand, that the threat of terrorist attacks from al Qaida and their affiliates is not a threat that has gone away. We have to take it seriously," Mr. Obama said. "And my expectation would be that over the next several years you are going to see a more comprehensive strategy, a more focused strategy, a more disciplined strategy to achieve our common goals."

"It's important to remind ourselves why we're there, and that is never to forget those who lost their lives on September 11; never forget those who have been killed in terrorist attacks since; never forget that many of those responsible were trained and given support in Afghanistan," Rudd said. "And so our mission remains, to ensure that that country doesn't become a safe haven for terrorists in the future."