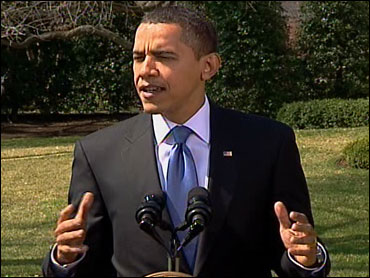 (CBS)
Before departing for California this afternoon, President Obama called for the creation of a "resolution authority" similar to the FDIC that would oversee institutions like AIG and help insure that massive government bailouts of such entities are not needed in the future.

The president said that while the situation with the AIG bonus payouts is troubling, "what I think is also important and just as outrageous is the fact that we find ourselves in a situation where we're having to clean up after AIG's mess."

He said he had just spoken to Financial Services Committee Chair Barney Frank about "giving ourselves tools to prevent ourselves from getting in a situation where an AIG can pose such enormous vulnerabilities to the system as a whole."

"And what we are working on is a resolution authority that would be similar, not identical but similar, to the powers that the FDIC currently has over banks," said the president. "What they're able to do is to, at the same time protect creditors, depositors, and consumers, while also exercising greater power proactively over institutions like AIG which is not a bank which is an insurance company with a hedge fund on top of it."

"It would allow us proactively to get out in front, make sure that we're separating out bad assets from good, dealing with contracts that may be inappropriate, and preventing the kinds of systemic risks that we've seen taking place with AIG," he added.

The president said the effort between the White House and Congress to create such an authority is "part of the broader package of financial regulatory steps that we're going to be taking that ensures that, going forward in the future, we're not going to find ourselves in these kinds of terrible positions again."

Mr. Obama went on to criticize what he called "the culture that these bonuses are a symptom of," which he said has existed "far too long."

The president decried "a situation where excess greed, excess compensation, excess risk taking have all made us vulnerable and left us holding the bag."

"And one of the messages that I want to send is that, as we get out of this crisis, as we work towards getting ourselves out of recession, I hope that Wall Street and the marketplace don't think that we can return to business as usual," he said. "The business models that created a lot of paper wealth but not real wealth in the country and have now resulted in crisis can't be the model for economic growth going forward."

He added that "we have to move beyond a constant bubble-bust mentality and start establishing a foundation for long-term economic growth."

The president also took personal responsibility for the AIG situation and defend Treasury Secretary Timothy Geithner and his economic team. You can read about that aspect of the remarks here.