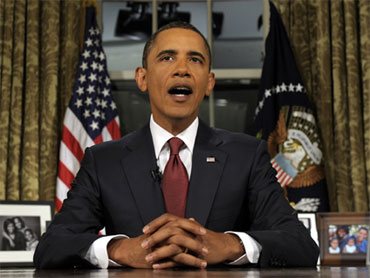 President Obama hailed his predecessor, George W. Bush, in his remarks on the end of combat operations in Iraq Tuesday night, stating that even though "he and I disagreed about the war from its outset," "no one could doubt President Bush's support for our troops, or his love of country and commitment to our security."

"As I have said, there were patriots who supported this war, and patriots who opposed it," he said. "And all of us are united in appreciation for our servicemen and women, and our hopes for Iraqis' future."

That's not to say Mr. Obama cast the war in a positive light. In his other mention of Mr. Bush, he noted that the former president, who he has harshly criticized over starting a war he in 2002 referred to as "dumb," announced the beginning of combat operations in Iraq from the same Oval Office desk where he was delivering his remarks.

"Much has changed since that night," he said. "A war to disarm a state became a fight against an insurgency. Terrorism and sectarian warfare threatened to tear Iraq apart. Thousands of Americans gave their lives; tens of thousands have been wounded. Our relations abroad were strained. Our unity at home was tested."

Before giving the speech, Mr. Obama called Mr. Bush to mark the end of combat operations; neither the White House nor Mr. Bush's camp would disclose what the two men discussed. Denis McDonough, chief of staff for Obama's National Security Council, would say only that the president felt it "important to reach out to President Bush."