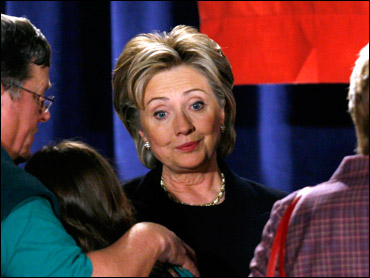 This column was written by Fred Barnes .

So much for the inevitability of Hillary Clinton as the Democratic presidential nominee. The biggest story in the world today is the defeat of Clinton and the entire Clinton political machine, led by her husband, former President Bill Clinton, in the Iowa caucuses. Iowa has the first contest in the 2008 presidential race, but it's not always a critically important event. This year it was.

The second biggest story is the Iowa victory of Barack Obama, a senator from Illinois who has just finished his third year in office. He is an African-American with remarkable appeal across racial and cultural lines. Obama is now not only the favorite to win the Democratic presidential nomination, he's the candidate in either party with the best chance of becoming the next president.

Mike Huckabee's defeat of Mitt Romney here in the Republican caucuses was extraordinary. But beating a former one-term Massachusetts governor is hardly as historically significant as Obama's triumph over Clinton. Until recently Huckabee, a Baptist preacher and the ex-governor of Arkansas, wasn't taken seriously by the media and political communities, including by me. But in Iowa he proved to have impressive campaign skills that may allow him to reach beyond the conservative Christian base responsible for his victory here. To win the Republican nomination, he'll need to.

So what's the status of the candidates? Some are better off as a result of the Iowa results, some worse. The next contests come quickly - the New Hampshire primary on Tuesday, then primaries in Michigan, South Carolina, and Florida, followed by 22 primaries on February 5.

Let's start with Obama. Pre-Iowa, polls showed him trailing Clinton in New Hampshire. He's likely to jump ahead of her now, though New Hampshire voters occasionally show a contrarian streak. If he wins the primary, Obama will become the prohibitive favorite for the nomination. For the past 36 years, a candidate, Republican or Democrat, who wins in Iowa and New Hampshire has always won the nomination. If New Hampshire doesn't cinch it for Obama, South Carolina, where half the Democratic voters are African-Americans, may.

Clinton has deep problems. She has a base in the Democratic party, but it wasn't enough to keep her from an embarrassing third place finish in Iowa. True, she can point to the elder George Bush, who finished third in Iowa in 1988 and then went on to win the Republican nomination. But his rivals weren't as formidable and attractive as Obama. For Clinton, winning New Hampshire is a must and now she's the underdog.

John Edwards emerges from Iowa on life support. He needed to win in Iowa, where he finished second (to John Kerry) in 2004. He practically lived in the state the past four years. It was his best shot. It's difficult to see an Edwards path to the nomination.

Now, the Republicans. Huckabee wisely added a populist economic message to his religious appeal in Iowa. It doesn't have much substance to it. It's largely sentiment. By emphasizing the populist pitch, he may broaden his appeal to Republican voters in states with fewer conservative Christians than Iowa. We'll see. In any case, the Republican race is wide open.

Romney is badly wounded, having made a massive effort in Iowa and failed. His support in polls in the early states has leveled off in the high 20s. And he hasn't succeeded in winning over rural, lower middle class, and evangelical Christian Republicans. New Hampshire is friendlier turf for him, but he must expand his base of support there, too. If he doesn't, he's facing a steep uphill climb to the nomination.

John McCain was mostly an absentee candidate in Iowa, but he got exactly what he'd hoped for there - Romney's defeat. McCain has concentrated on New Hampshire, where his poll numbers are skyrocketing. He's the closest thing to a favorite in the state now. Beating Romney would put him squarely in the hunt for the Republican nomination.

Rudy Giuliani ignored Iowa and is counting on winning later primaries in big states - a strategy that has never worked in the past. Fred Thompson, with a third place showing in Iowa, is a walking dead man, politically speaking. Duncan Hunter isn't even walking. Libertarian Ron Paul got 10 percent of the Iowa vote, which will keep him in the race and maybe catapult him into Sunday's Fox News debate in New Hampshire.

So Iowa reinforces the odds favoring a Democratic victory in 2008. And Iowa has given Democrats a clear frontrunner who is likeable and inspiring (at least to Democrats). More important, he's an African-American who appeals to white voters. His victory in overwhelmingly white Iowa may turn out to be the start of an Obama surge to the White House.
By Fred Barnes
©