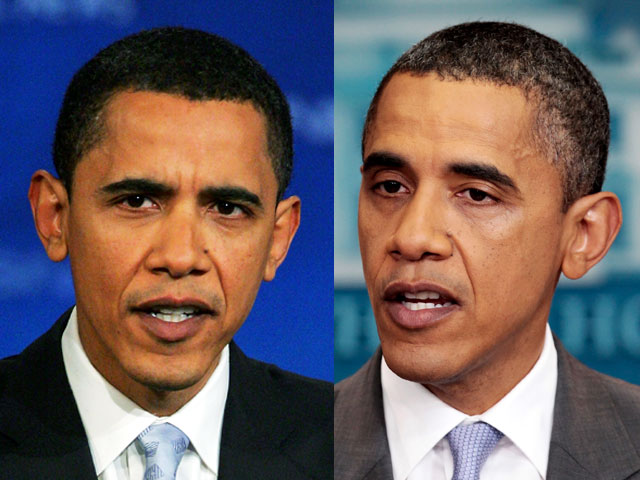 (CBS) As President Barack Obama marks his 50th birthday today, he's showing the marks of aging - including a little more wrinkling and a lot more gray hair. The change in appearance has people wondering:

Do presidents undergo a process of accelerated aging while in office? Absolutely, say some experts.

"The typical person who lives one year ages one year," Dr. Michael Roizen, the author of "Real Age: Are You as Young as You Can Be?," told CNN in 2009. "The typical president ages two years for every year they are in office." Roizen arrived at the two-for-one figure after reviewing the medical records of U.S. presidents back to the 1920s.

If candle count alone hasn't caused the changes in Obama's appearance, what has?

Dr. James A. McCubbin, a Clemson University psychologist, blames the heavy psychological demands that go with the bully pulpit.

"Chronic stress can produce lots of wear and tear on the body," he told CNN. "That is what we see in the changes in the appearance in the beginning and end of the presidency."

Stress may be one factor in the aging process, but so are behavior and heredity. Obama has acknowledged smoking, which is known to speed the development of facial wrinkles. But by offering some protection against the skin-aging effects of sunlight, Obama's dark pigmentation may have kept him from looking even older.

"When I look at our president," Chicago plastic surgeon Dr. Julius W. Few, told the New York Times, "I see a combination of good genetics and the fact that there's extra pigment in the skin that is protective. Contrast that with, now he has some gray in his hair, a sign that he is older, but his face doesn't match what you see in his hair. It's a contrast that you could say is even more attractive. His face tells you one thing and his hair tells you something else."

What does Obama have to say about his appearance?

"Obviously, I've gotten a little grayer since I took this job, but otherwise I feel pretty good," he told USA Today. "And Michelle, you know, says that she still thinks I'm cute - and I guess that's all that matters, isn't it?"

Fauci says "dark winter" can be avoided if more are vaccinated
Thanks for reading CBS NEWS.
Create your free account or log in
for more features.
View CBS News In
CBS News App Open
Chrome Safari Continue
Be the first to know
Get browser notifications for breaking news, live events, and exclusive reporting.