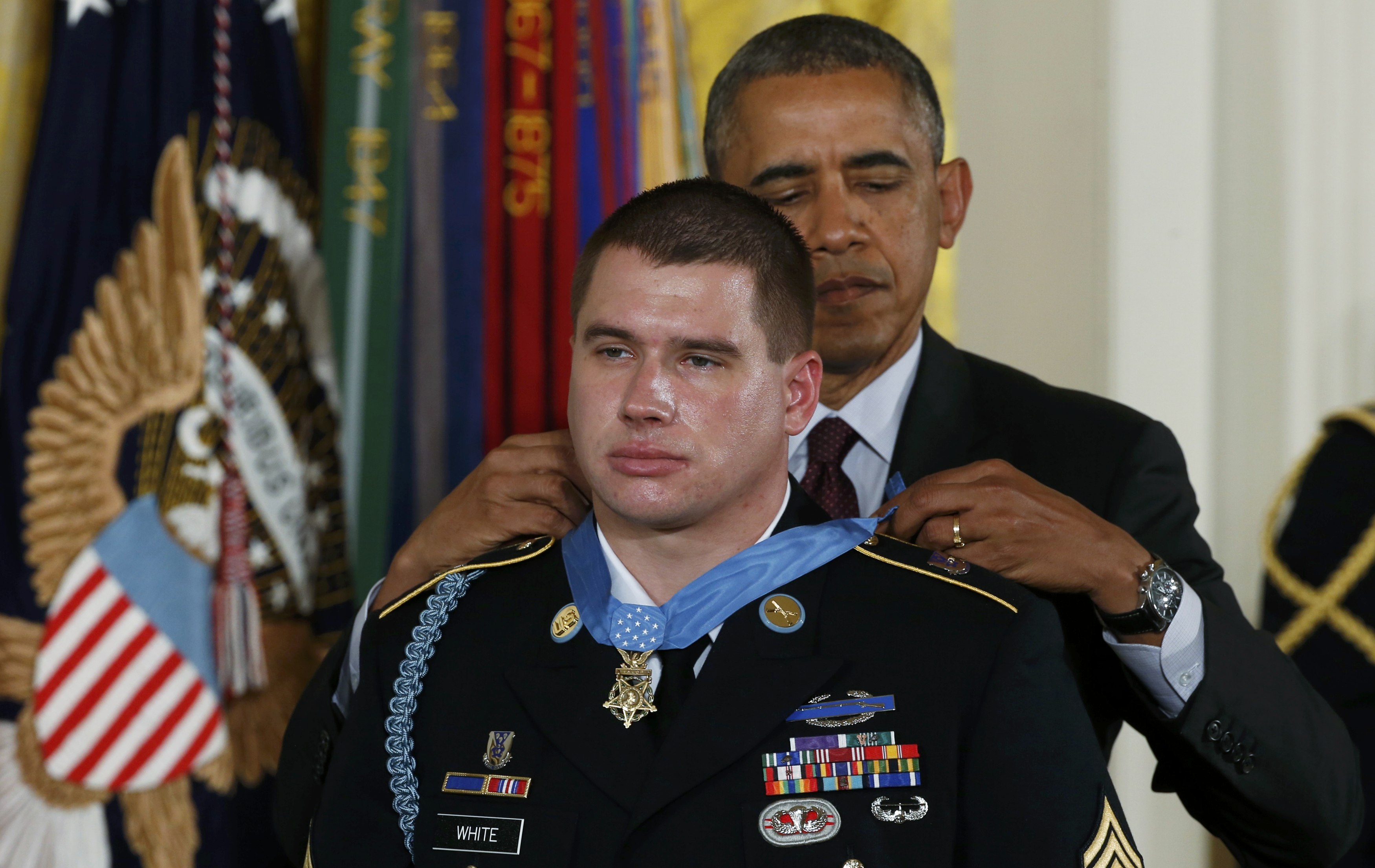 President Obama on Tuesday awarded the Medal of Honor, the nation's highest military decoration, to former active duty Army Sergeant Kyle J. White for his heroic actions in Afghanistan in 2007.

White was serving as a platoon radio telephone operator with the 173rd Airborne Brigade in Nuristan Province when his team of U.S. and Afghan National Army soldiers was ambushed by a much larger, more heavily armed Taliban force.

White was knocked unconscious by an enemy RPG, and when he came to, he realized he was separated from most of his platoon. White put himself in the line of fire to assist two of his fellow soldiers who were seriously wounded.

"When you're deployed, [White] later said, those people become your family," Mr. Obama said from the East Room of the White House Tuesday, with White by his side. "His family was tested that day. Not a single one of them returned without injury, and six brave Americans gave their lives."

Mr. Obama told White, "You make us proud, and you motivate all of us to be the best we can be."

On Nov. 9, 2007 -- when White was just 20 years old and 21 months into his service -- he and his platoon of 13 other American soldiers were attacked. They were walking up a steep hill after a meeting with Afghan elders and headed into an area known as "ambush alley." The platoon returned fire, but an enemy grenade knocked White out. After he awoke, enemy rounds sent shrapnel into his face.

Most of White's team had slid down the hill, but White saw that his fellow soldier Spc. Kain Schilling was badly injured after getting shot in the arm. White helped him apply a tourniquet while shielding Schilling from oncoming fire.

"The rounds are still coming in left and right, and cracking right past you," White told CBS News' David Martin. "The amount of fire that was coming in, you know, I did my job I was trained to do, just like everybody else, and I identified how bad the wound was and tried to treat it on the spot. And the amount of blood I saw, I put a tourniquet on his upper arm and then began to return fire to the enemy."

Then White saw that Marine Sgt. Phillip Bocks was also wounded badly and unable to join White and Schilling behind the small tree where they were staked out.

White recalled, "I saw him out there, that he was exposed and I said basically 'screw it' and I got up and ran out to him... I remember thinking to myself I'm not going to make it through this one, you know, because there's just too much fire, and we're caught on the side of a cliff. This is it. If I'm not going to make it, then I'm at least going to try to help somebody until it happens."

Worried that he'd exposed Bocks to more gunfire, White retreated with enemy rounds following him. He repeatedly returned to Bocks until he dragged him to relative safety. Bullets whizzed by him, but as Mr. Obama remarked Tuesday, "somehow, miraculously, they never hit him." Bocks died from his wounds on that cliff.

Schilling sustained another injury to his knee, so White ripped off his own belt to tourniquet the injury. Crouching behind that lone tree, White began calling in air strikes. He stayed with Schilling as night fell until they were lifted out to safety.

As the only able-bodied soldier there, he saved Schilling's life, but White told Martin he's uncomfortable with that declaration. "I was just doing what was the bare minimum to keep him alive. It felt like just instinct to do that," he said.

White completed the rest of his deployment in Afghanistan, and he left the Army in 2011. With the help of the post-9/11 GI Bill, he graduated from UNC Charlotte and is now an investment analyst in Charlotte, N.C. He is also Schilling's daughter's godfather.

Now, Mr. Obama said, "people see a man in a suit headed to work, and that's how it should be -- a proud veteran... contributing his talents and skills to the progress of our nation."

He told White, "You did your duty, and now it's time for America do to ours" by giving its veterans the benefits and support they've earned.