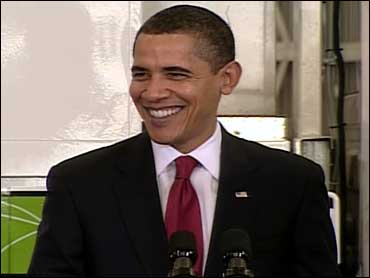 (CBS)
After touring the Edison Electric Vehicle Technical Center in Pomona, California today, President Obama announced an outlay of $2.4 billion is stimulus funds meant to encourage the production of next generation plug-in hybrid electric vehicles and advanced battery components for such vehicles.

"I am announcing that the Department of Energy is launching a $2 billion competitive grant program under the Recovery Act that will spark the manufacturing of the batteries and parts that run these cars, build or upgrade the factories that will produce them, and in the process, create thousands of jobs right here in America," the president said.

He added that the government is "making a $400 million down-payment on the infrastructure necessary to get these cars on the road; and because these cars won't leave the showroom unless consumers buy them, the Recovery Act includes a new tax credit of $7,500 to encourage Americans to plug one in at home."

"Show us that your idea or your company is best-suited to meet America's challenges, and we will give you a chance to prove it," the president said, adding that "every company that wants a shot at these tax dollars has to prove their worth."

The president's full remarks, as prepared for delivery, are below. He opened with a joke about how it's "always nice to get out of Washington for a little while and recharge your batteries."

PRESIDENT OBAMA: It is good to be back in California. It's always nice to get out of Washington for a little while and recharge your batteries. You know a little bit about that here. And I want to thank the folks here at the Electric Vehicle Technical Center for the tour we just had.

Yesterday, I was in Costa Mesa talking with folks about this economic downturn we're in – a downturn that's hitting this state as much as any. One in ten Californians are out of work and actively looking for jobs. And the foreclosure crisis has had a devastating impact on Southern California in particular. But Californians aren't just bearing the brunt of this crisis – you're doing what needs to be done to overcome it.

This workshop is a perfect example of that. Day by day, test by test, trial by painstaking trial; the scientists, engineers, and workers at this site are developing the ideas and innovations that our future depend upon. It is your ingenuity that will help create the new jobs and new industries of tomorrow.

It isn't easy. There are days, I'm sure, when progress seems fleeting, and days when it feels like you're making no progress at all. But often, our greatest discoveries are born not in a flash of brilliance, but in the crucible of a deliberate effort over time. And often, they take something more than imagination and dedication alone – often they take an investment from government. That's how we sent a man to the moon. That's how we were able to launch a world wide web. And it's how we'll build the clean energy economy that's the key to our competitiveness in the 21st century.

We'll do this because we know that the nation that leads on energy will be the nation that leads the world in the 21st century. That's why, around the world, nations are racing to lead in these industries of the future. Germany is leading the world in solar power. Spain generates almost 30 percent of its power by harnessing the wind, while we manage less than one percent. And Japan is producing the batteries that currently power American hybrid cars.

So the problem isn't a lack of technology. You're producing the technology right here. The problem is that, for decades, we have avoided doing what must be done as a nation to turn challenge into opportunity. As a consequence, we import more oil today than we did on 9/11. The 1908 Model T earned better gas mileage than a typical SUV sold in 2008. And even as our economy has been transformed by new forms of technology, our electric grid looks largely the same as it did half a century ago.

That is what my recovery plan does. It will create or save 3.5 million jobs – nearly 400,000 of them right here in California – in part by making investments in areas critical to our long-term growth.

And that is the forward-thinking purpose of the budget I have submitted to Congress. It's a budget that makes hard choices about where to save and where to spend; that makes overdue investments in education, health care, and yes, energy – investments that will catalyze innovation and industry, creating green jobs and launching clean, renewable energy companies right here in California.

In the next three years, we will double this nation's supply of renewable energy. We have also made the largest investment in basic research funding in American history – an investment that will spur not only new discoveries in energy, but breakthroughs in science and technology.

We will invest fifteen billion dollars a year to develop technologies like wind power and solar power; advanced biofuels, clean coal, and more fuel-efficient cars and trucks that are built right here in America.

We will soon lay down thousands of miles of power lines that can carry new energy to cities and towns across this country. We will put Americans to work making our homes and buildings more efficient so that we can save billions of dollars on our energy bills, just like you've done in California for decades. And we will put one million plug-in hybrid vehicles on America's roads by 2015.

Because these cars of tomorrow require the batteries of tomorrow, I am announcing that the Department of Energy is launching a $2 billion competitive grant program under the Recovery Act that will spark the manufacturing of the batteries and parts that run these cars, build or upgrade the factories that will produce them, and in the process, create thousands of jobs right here in America.

Show us that your idea or your company is best-suited to meet America's challenges, and we will give you a chance to prove it. And just because I'm here today doesn't exempt all of you from that challenge – every company that wants a shot at these tax dollars has to prove their worth.

We are also making a $400 million down-payment on the infrastructure necessary to get these cars on the road; and because these cars won't leave the showroom unless consumers buy them, the Recovery Act includes a new tax credit of $7,500 to encourage Americans to plug one in at home.

True to form, California has already forged ahead with its own plans rather than wait for Washington. It's fitting that the state home to the first freeway and the first gas station is already at work devising the next freeway and the next gas station. This "green freeway" you're planning with Oregon and Washington would link your states with a network of rest stops that allow you to do more than just grab a cup of coffee; but also charge your car, refuel it with hydrogen or biofuels, or swap out a battery in the time it takes to fill a gas tank. Charging stations have begun to pop up around downtown San Francisco, and that city has joined with San Jose and Oakland with the vision of becoming the "electric vehicle capital of the United States."

Here at Southern California Edison, and all across the country, in factories and laboratories, at the Big Three and at small startups, these innovations are taking place right now. In Michigan, and Ohio, and right here in California, we are seeing exciting developments in this field as hardworking men and women are already laying the groundwork for this new industry. Even as our American automakers are undergoing a painful recalibration, they are retooling and reimagining themselves into an industry that can compete and win, because millions of jobs depend on it.

This is the critical work you're doing. But it's just one component of what must be a comprehensive energy plan. That's why we are making an $11 billion investment in upgrading our power grid, so that it can carry renewable energy from the far-flung places that harness or produce it to the cities that use it. That's why we will create jobs retrofitting millions of homes and cutting energy use in federal buildings by one quarter, saving the American taxpayer $1.5 billion each year.

These are challenging times, but we know we can do this. It won't come without cost, nor will it be easy. We've got 240 million cars already on the road. We've got to upgrade the world's largest energy grid while it's already in use. And other countries aren't standing around and waiting for us; they are forging ahead with their own bold energy plans.

But we have faced tough challenges before. And at our best, we have never relied on hope and chance alone. Time and again, we have tapped those great American resources: industriousness and ingenuity. That, after all, is what California is all about. This is a state that has always drawn people who've had their eyes set on the horizon; who've always dreamed of a future that others thought beyond reach. That is the spirit that you are reclaiming here at the Electric Vehicle Test Center, and that is the spirit we need to reclaim all across this country. Thank you.