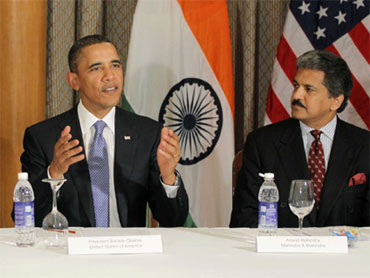 President Barack Obama has announced $10 billion in trade deals with India that are expected to help pay for 54,000 U.S. jobs.

He's also unveiling new export rules to make it easier for U.S. companies to do business with the nation of 1.2 billion people. Some of the changes, including relaxing controls on India's purchase of "dual use" technologies that could be used for civilian or military purposes, have been top priorities for the business community.

Speaking Saturday to American and Indian chief executives on the first day of a 10-day trip through Asia, Mr. Obama said the relationship between the U.S. and India "will be one of the defining and indispensable partnerships of the 21st century."

In the wake of Democrats' midterm election losses, attributed partly to continued high unemployment in the U.S., the White House is working overtime to present the president's trip as singularly focused on U.S. jobs and the domestic economy.

The commercial deals include the purchase of 33 737s from Boeing by India's SpiceJet Airlines; the Indian military's plans to buy aircraft engines from General Electric; and preliminary agreement between Boeing and the Indian Air Force on the purchase of 10 C17s.

For the most part, the deals were already pending, but the White House contends President Obama's visit to India helped finalize them.

Officials said the deals would support 53,670 U.S. jobs, but it was not clear how many, if any, new jobs would be created as a result.

The announcements came shortly after Mr. Obama arrived in Mumbai, where his first stop was at the Taj Mahal hotel to commemorate the 2008 terror attacks that killed 166 people across the city. The president said he intended to send a signal by making Mumbai the first stop of the trip and by staying at the Taj, which was a target during the terror siege.

But illustrating the difficulties of the U.S.-India relationship even as Mr. Obama began a trip aimed at strengthening it, Indian commentators quickly seized on the president's failure in his spoken remarks to mention Pakistan. Pakistan was the home of the 10 assailants, the place where they trained and the base they used to launch the attack.

Pakistan is also India's archrival - but a linchpin for Washington and its allies in the war in Afghanistan.

After his remarks on the terror attacks, Mr. Obama visited a museum in a home where Mohandas Gandhi once lived.

The president is aware of sometimes being perceived as anti-business in corporate America, and said after the elections last week that he wanted to change that perception. Much of Mr. Obama's day Saturday appeared geared toward that goal.

Before his speech to the U.S.-India Business Council, President Obama met with CEOs. Reporters looked on as he again tied his mission to U.S. job creation and proclaimed the importance of working with fast-growing economies. "No country represents that promise of a strong, vibrant, commercial relationship more than India," the president said.

The White House also arranged for four American chief executives who are in India for the occasion to brief reporters traveling with the president. They talked up the importance of India as a trading partner and praised President Obama's decision to come to the country to underscore that point in person.

"India represents the 14th-largest trading partner of the United States. Why? With all of the opportunity, it should be so much bigger. And that's what this opportunity is all about," said Terry McGraw, chairman and chief executive of the McGraw-Hill Companies.

President Obama was spending three days in India, his longest stretch yet in one country, a point U.S. officials have been careful to emphasize as they play up the administration's interest in nurturing the relationship.

The White House is going to great lengths to bring attention to the economic potential and shared democratic values that define its relationship with India and its 1.2 billion residents.

Briefing reporters aboard Air Force One, National Security Adviser Tom Donilon said Mr. Obama intends the trip to be "a full embrace of India's rise." Said Donilon: "There's no more powerful way to do that than a presidential trip."

Indian officials said Mr. Obama's visit underscored the close ties that have developed between the two nations over the past 10 years after decades of wary relations.

But serious disagreements remain, and they appear unlikely to be resolved during Mr. Obama's visit.

India has raised concerns about the billions of dollars in military aid the U.S. is funneling to Pakistan, which is India's archrival but a linchpin for Washington and its allies in the war in Afghanistan. Leaders here also are wary of the increasing rhetoric by U.S. politicians against the outsourcing of jobs abroad, including to India.

Air Force One touched down in the booming financial center of Mumbai around midday after traveling more than 15 hours from Washington. The Indian afternoon was humid and bright. A red carpet was rolled toward the steps of Air Force Once and Mr. Obama and his wife, Michelle, emerged with smiles. They were greeted by about a dozen people, including Tim Roemer, the U.S. ambassador to India. Mrs. Obama also received a bouquet of bright red roses.

"It is hard to overstate the importance of Asia to our economic future," the president wrote Saturday in an op-ed published Saturday in The New York Times.

The president left Washington shortly after the government reported that the economy added 151,000 jobs in October. It wasn't enough to lower a stubborn 9.6 percent jobless rate, and the president said it wasn't good enough.

On the longest foreign trip of his presidency, Mr. Obama's business-first message is aimed particularly at India, where he is spending three full days. That's also the longest amount of time he has spent in any other country as U.S. president.

The trip is also taking him to Indonesia, where he lived for four years as a youth, to South Korea for a meeting of the Group of 20 developed and developing nations, and then to Japan, for an American Pacific Economic Cooperation forum.

On Sunday he heads to New Delhi, the capital, where he will address the parliament.