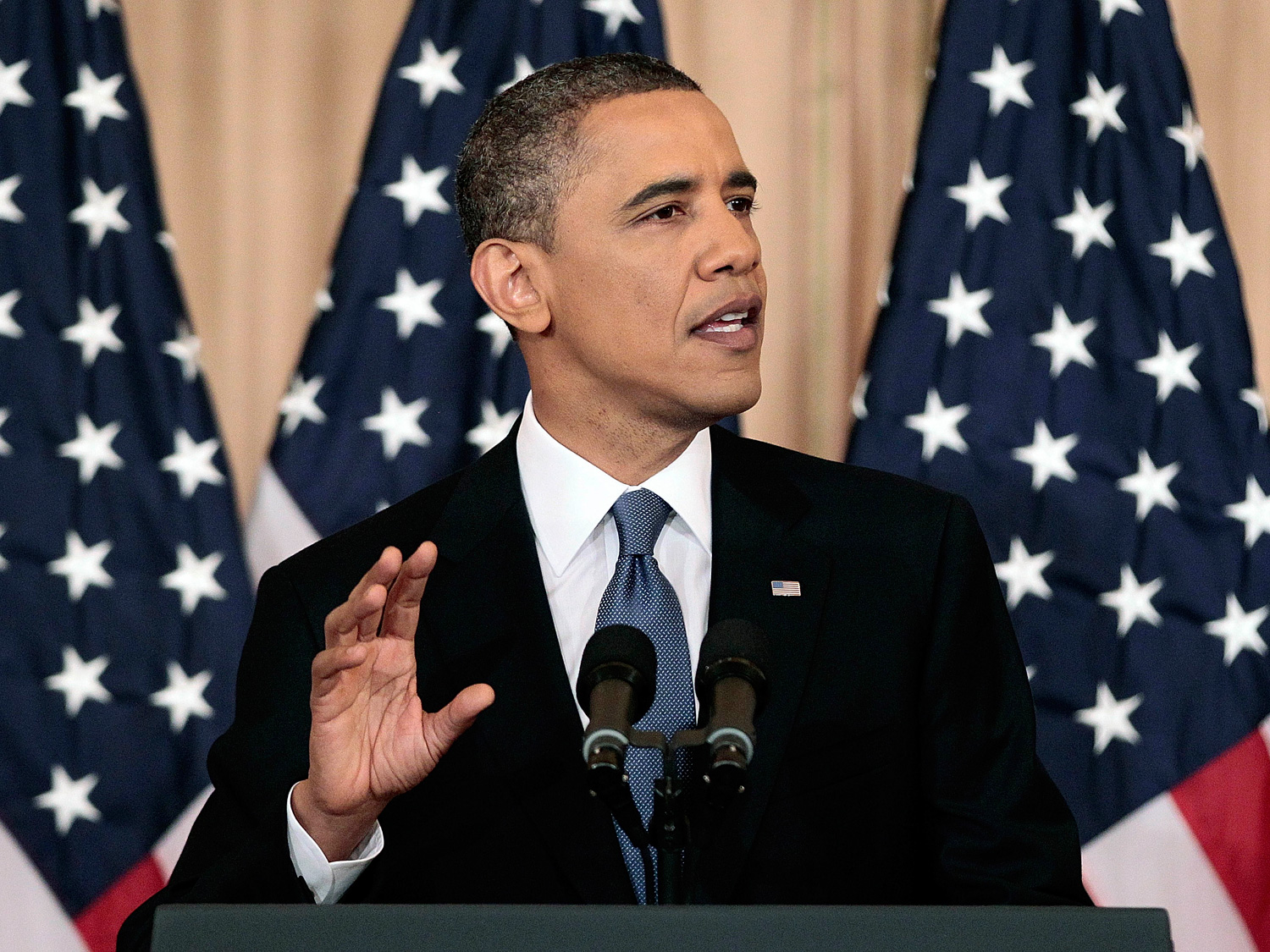 WASHINGTON - President Barack Obama says the future of the U.S. is bound to the Middle East and North Africa by the forces of economics, security, history and fate.

Mr. Obama opened a major speech on U.S. policy in the region by trying to tell Americans why it matters to them even though the countries "may be a great distance from our shores."

The president spoke at the State Department in his first comprehensive remarks on the astonishing ripples of change in the Middle East. He hailed the killing of al-Qaeda terrorist leader Osama bin Laden and declared that bin Laden's vision of destruction was fading even before U.S. forces shot him dead.

Mr. Obama said the "shouts of human dignity are being heard across the region."


In his remarks, Mr. Obama also called for Syrian President Bashar Assad to lead his country to democracy or "get out of the way," his most direct warning to the leader of a nation embroiled in violence.

Mr. Obama said the Syrian government "has chosen the path of murder and the mass arrests of its citizens." He praised the Syrian people for their courage in standing up to repression in a bloody crackdown that has killed hundreds.

The president argued that Syria's brutal crackdown on pro-reform activists is unacceptable. He said Assad could no longer rule through repression and must change course if he wants international acceptance. More than 850 people are believed to have been killed in two months of unrest in Syria.

The White House on Wednesday announced the sanctions on Assad and six senior Syrian officials for human rights abuses over their crackdown on anti-government protests. It was the first time the U.S. personally penalized the Syrian leader for the actions of his security forces. More than 850 people have died since the uprising began in March.

Mr. Obama said the region's revolutions speak to a "longing for freedom" that has built up for years and has led to the overturning of tyrants - with perhaps more to fall. He embraced the call for change and compared it to signature moments of U.S. history such as the American revolution and the civil rights movement.

The president noted that some "true leaders" had stepped down in the recent wave of change in the region and that "more may follow." He quoted civilian protesters who have pushed for change in Egypt, Libya, Syria and Yemen but noted that among those countries, only Egypt had seen the departure of a long-ruling autocratic leader.

Mr. Obama said that while there will be setbacks that accompany progress with political transitions, the movements present a valuable opportunity for the U.S. to show which side it is on. "We have a chance to show that America values the dignity of the street vendor in Tunisia more than the raw power of a dictator," he said, referring to the fruit vendor who killed himself in despair and sparked a chain of events that unleashed uprisings around the Arab world.

Mr. Obama, however, skipped the chance to offer a strong new condemnation of Iran in his speech.

The president accused Iran Thursday of hypocrisy and reiterated U.S. opposition to the country's intolerance, illicit nuclear program and sponsorship of terror. The president also said those views were well-known and he did not dwell on them. Nor did he cast Iran as the bogeyman of the Middle East, as U.S. officials have in the past.

Iran merited little more than a paragraph in the 45-minute speech. The Obama administration's outreach to Tehran has gone nowhere, although U.S. officials still hope they can lure Iran into negotiations over its nuclear program and other issues.

Mr. Obama addressed the Israel-Palestine conflict, and, in a move that will likely infuriate Israel, endorsed the Palestinians' demand for their future state to be based on the borders that existed before the 1967 Middle East war. Israel says the borders of  Palestinian state have to be determined through negotiations.

Mr. Obama sided with the Palestinians' position a day ahead of a visit to Washington by Israeli Prime Minister Benjamin Netanyahu. Netanyahu is vehemently opposed to referring to the 1967 borders.

Until Thursday, the U.S. position had been that the Palestinian goal of a state based on the 1967 borders, with agreed land swaps, should be reconciled with Israel's desire for a secure Jewish state through negotiations.

In a statement following Mr. Obama's remarks, Israeli Prime Minister rejected the president's endorsement, and  said a return to his country's 1967 borders would spell disaster for the Jewish state.

The tough stand could set the stage for a tense meeting Friday when Netanyahu goes to the White House.