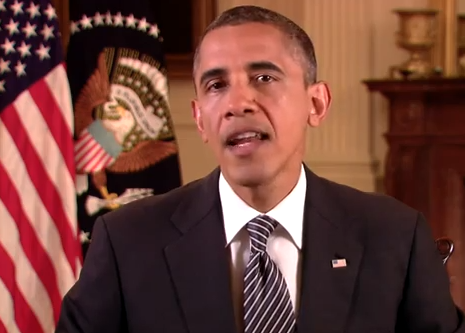 (CBS News) As the United States mourns the deaths of four Americans killed in Libya this week, President Obama said that the United States "must also send a clear and resolute message to the world: those who attack our people will find no escape from justice."

In his weekly address Mr. Obama saluted the four killed Tuesday as representing "the very best of our country." The president individually acknowledged each of the four American diplomats, who were honored at a ceremony at Joint Base Andrews on Friday, following what Mr. Obama called an "outrageous attack" on a U.S. consulate in Libya earlier this week.

Glen Doherty and Tyrone Woods, both former Navy SEALs, "died as they lived their lives - defending their fellow Americans, and advancing the values that all of us hold dear," Mr. Obama said. Sean Smith, who formerly served in the Air Force, went on to work for the State Department, "always answering his country's call." And Ambassador Chris Stevens, the president continued, "died a hero in two countries": the United States and Libya, "a country that he helped to save, where he ultimately laid down his life."

"This tragic attack takes place at a time of turmoil and protest in many different countries," Mr. Obama said. "I have made it clear that the United States has a profound respect for people of all faiths. We stand for religious freedom, and we reject the denigration of any religion - including Islam. Yet there is never any justification for violence. There is no religion that condones the targeting of innocent men and women. There is no excuse for attacks on our Embassies and Consulates."

While the "images on our televisions are disturbing," the president concluded, "let us never forget that for every angry mob, there are millions who yearn for the freedom, and dignity, and hope that our flag represents."

Boasting 22 years of service in the Army, Florida Congressman and retired Army Lieutenant Colonel Allen West - delivering the Republican response - also nodded to the diplomats killed in Libya. Their memories, he argued, depend on President Obama working with a split Congress to replace the defense sequester - a "serious threat to our national security," he said.

"For all the coverage of Election Day, there's another date looming - January the 2nd - that has serious consequences for our nation's security," West said. "On that day - if the government does not act - automatic, across-the-board spending cuts will take effect, cuts that would reduce funding for our national defense by as much as 10 percent.

"I cannot understate the amount of damage these cuts would do to our military. They would essentially hollow out our armed forces."

The deaths of the U.S. diplomats in Libya are "stark, horrific reminders that freedom remains under siege by forces who relish terror and violence over freedom and free expression," West said. "It is because of these threats that America must continue to fund its military and support its Armed Forces to the fullest extent. The lives of all Americans depend on it. As do the memories of Ambassador Chris Stevens and the public servants who perished with him this week in the Middle East."