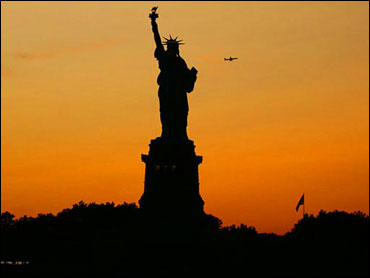 (CBS/Gordon Donovan)
Ken Salazar, the new Secretary of the Interior, today toured the crown of the Statue Of Liberty, which has been closed to the public since the Sept. 11 terrorist attacks.

Salazar said that reopening the crown is "very important" to him, though he noted that the safety of the public must be taken into account. He said a study on safety concerns at the monument is expected to be finished in April.

The interior secretary dubbed the experience of touring the crown "awesome" after he descended today.

To get to the crown, visitors must ascend a narrow, 354-step stairwell originally built for use by workers, not tourists. Park police have long deemed the stairwell insufficient in the event of a medical emergency.

"It is tight," said state Rep. Anthony D. Weiner, who accompanied Salazar and backs reopening the crown, according to the New York Times. "It is cramped. It is hot. It probably isn't completely safe to have everyone go up, in any numbers, at any time. But the Park Service is full of slightly dangerous things you can do."

As the Associated Press reports, the base, pedestal and lower observation deck of the statue reopened in 2004 after a $20 million upgrade to address fire safety.