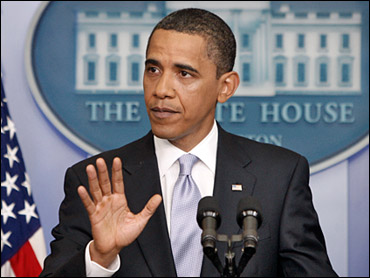 (AP Photo/Ron Edmonds)
At his press conference this afternoon, President Obama, who calls himself a "former smoker," acknowledged that he still occasionally falls "off the wagon."

The president said that he does not smoke in front of his kids or the rest of his family, and compared his situation to that of a recovering alcoholic.

"I've said before that as a former smoker I constantly struggle with it," the president said. "Have I fallen off the wagon sometimes? Yes. Am I a daily smoker, a constant smoker? No."

Mr. Obama invoked Alcoholics Anonymous in discussing grappling with his craving for cigarettes.

"I don't know what to tell you, other than the fact that, you know, like folks who go to A.A., you know, once you've gone down this path, then, you know, it's something you continually struggle with, which is precisely why the legislation we signed was so important, because what we don't want is kids going down that path in the first place," he said.

He complained in the press conference that he is asked about his smoking "every month or so," but said he understands because the topic is "an interesting human interest story."

This was the first clear response the White House has offered on Mr. Obama's smoking since he took office.

Mr. Obama also teased a reporter for tying the question to the legislation he signed Monday, which he said is focused on children, not adults. "You just think it's neat to ask me about my smoking," the president said.