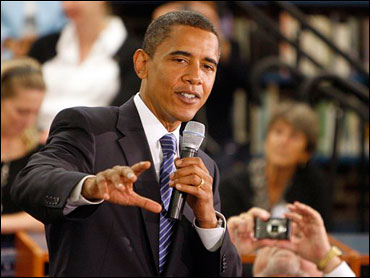 Calling it "the latest made-up controversy by the John McCain campaign," Obama responded to the Republicans' charge that he was referring to Palin when he used the phrase "lipstick on a pig" at a campaign stop Tuesday.

"I don't care what they say about me. But I love this country too much to let them take over another election with lies and phony outrage and Swift-boat politics. Enough is enough," he said.

Obama's reference was to the Swift Boat Veterans for Truth, an outside group that in 2004 made unsubstantiated allegations about Democratic nominee John Kerry's decorated military record in Vietnam.

On Tuesday, Obama criticized McCain's economic policies as similar to those of President Bush, saying: "You can put lipstick on a pig ... it's still a pig."

CBS News reporter Maria Gavrilovic reports that as the crowd laughed, Obama added: "You can you can, wrap an old fish in a piece of paper called change, it's still going to stink after 8 years. We've had enough of the same old thing."

The McCain campaign contended that the comments were directed at Palin, the GOP's first woman on a presidential ticket. In her acceptance speech last week, she had referred to herself in a joke about lipstick being the only difference between a hockey mom and a pit bull.

Accusing Obama of "smearing" Palin in "offensive and disgraceful" comments, the McCain campaign demanded an apology - though McCain himself used the folksy metaphor a few times last year, including once to describe Democratic Sen. Hillary Rodham Clinton's health care plan.

(Check out this post in our Horserace blog to see examples of McCain and other Republicans using the phrase.)

Just moments after the comments, the Republicans held their first ever "Truth Squad" call to condemn the remarks, reports Gavrilovic. Former Massachusetts Gov. Jane Swift interpreted Obama's remarks to mean that he called Palin a "pig" and McCain an "old fish."

When pressed on why she assumed that Obama was comparing Palin to a pig, Swift referred to Palin's "pit bull in lipstick" joke at the convention. She added, "as far as I know she is the only candidate that wears lipstick" and this "seems like a very gendered remark." (Read more from Gavrilovic.)

The McCain campaign on Wednesday issued an Internet ad that said Obama was talking about Palin and said of Obama: "Ready to lead? No. Ready to smear? Yes."

Obama began a discussion of education at a Norfolk high school on Wednesday by assailing McCain's campaign.

"What their campaign has done this morning is the same game that has made people sick and tired of politics in this country. They seize on an innocent remark, try to take it out of context, throw up an outrageous ad because they know that it's catnip for the news media," Obama said.

Obama's campaign has accused the GOP camp of engaging in a "pathetic attempt to play the gender card." In an e-mail to reporters Wednesday, the campaign noted two other instances of McCain using the phrase "lipstick on a pig" and its use by other Republicans such as House Minority Leader John Boehner and Arizona Sen. Jon Kyl.

"This is just the kind of discussion that the Obama campaign does not want to be caught up in right now, whether it's a manufactured controversy or not" said CBSNews.com senior political editor Vaughn Ververs. "Every day in which the contest appears to be one between Obama and Sarah Palin is a good day for John McCain."