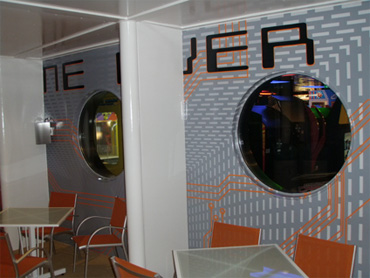 OASIS OF THE SEAS - With the largest cruise ship in the world on its maiden voyage - Royal Caribbean's Oasis of the Seas - a lot has been written about its sheer size (five times the tonnage of the Titanic and larger than any aircraft carrier) and its amenities (four swimming pools, two surfing simulators, two rock climbing walls, a basketball court and volleyball court, a zip line, a miniature golf course, an outdoor park with 12,000 plants, a boardwalk with full-sized carousel, 16 restaurants, an AquaTheater, a full Broadway auditorium, etc.). But for the growing number of travelers who play videogames, this ship offers the most innovative options ever seen on the high seas.

"We have over 20 different Wiis set up in the Teen Club and Adventure Ocean areas of the Oasis of the Seas for our youth programs," said Alison Frazier, activities specialist at Royal Caribbean International. "In addition to the kids programs, we set up a Wii inside our karaoke lounge, On Air, every day within the daily activity program. Guests of all ages can play Wii on the big screen in that lounge. We host various tournaments, family activities and free play in that venue, which is a lot of fun for the cruise staff as well as the passengers."

Frazier said that videogames are huge with the cruise line's teen population. Over 365,000 kids took a Royal Caribbean cruise aboard one of the line's 21 ships last year. That huge number, coupled with the expanding videogame demographic that now has the average age of a gamer at 33, has resulted in more innovation in on-board videogame activities.

"When we do family tournaments, it's the teens dragging mum and dad," said Frazier. "Then we have family-to-family battles on Wii, but I think really the teens are still driving it. For us, the great thing about working with Nintendo is that the Wii attracts such a broad audience of gamers, which is perfect for our ships. Wii is about the broad gaming audience. It's not just computer games for the kids. This is for anybody and everybody, which is what our whole programming philosophy is: come on board and try it."

Oasis of the Seas offers two massive areas, separated almost by the full length of the ship, catering to young kids and teens. In the past, everything was clumped together. Now, teens have their own hangout area with a lounge that includes a dozen Wiis and PlayStation 3s. All of the teen and kids facilities have been built so that game consoles can easily be swapped out, or upgraded, over time. Right now, Royal Caribbean is focused on Wii and PS3, but it will be easy to upgrade to new consoles over the life span of the brand-new ship.

"It's amazing where gaming has come, especially on vacations. It's the interactive gaming experience that people want to be part of," said Charlie McDonald, director of guest activities for Royal Caribbean International. "We can set up Rock Band in all of our different facilities, but also down in the On Air club. We had it going the other night, and it's amazing. It's not just for kids and teens. You'll have a bunch of dads or senior citizens down there jamming out on the guitar and drums."

Oasis of the Seas is equipped with the latest games, including The Beatles: Rock Band with all the instruments. The main teen lounge also has an HD TV for playing on the big screen. New games are sent to the ship on a regular basis, and teens can also bring their own games on board.

"We really listen to the teens. If we don't have it, they tell us, and then we can pretty much quickly turn that around in a week or so," said McDonald. "We're really lucky to have our audience right in front of us, interacting with us, and actually building a relationship with them. The teens come to the facilities; they hang out with the staff. If there's a title that we don't have, the staff can get it out here in the next week or so. We really have a pretty fast ability to keep up with the latest. Plus, it's not too difficult, the way games are marketed today, to just pick up the Sunday circular and know what we need to buy for our passengers."

For those looking for old school or total immersion gaming, Oasis of the Seas is the first ship to have two arcades. The Kids Arcade features G-rated family games like NickToons Nitro and Sega Rally 3 and is located near the kids area of the ship for parents to play with their children. The Challenger Video Arcade is located next to the Teen Center and open for the entire ship. This arcade is home to three air hockey tables and a dozen different sit-down racing games like Sega R-Tuned and H2 Overdrive, as well as family-friendly titles like Dance Dance Revolution X and Guitar Hero Arcade. There are also classic games like Ms Pac-Man, Galaga and Justice League Heroes United.

"I grew up going to the arcade in the mall and I've introduced my family, my girls, to that style of gaming," said McDonald. "I think that the arcade is just part of our national fabric, so we had to have them here on the Oasis of the Seas. They're a big part of the cruise experience. One of the cool things we do early in the cruise is we offer a one-hour free session for all kids and teens. Anyone participating in our events and our programs can come play any of the games for an hour free. It gives them a chance to test all the games early. They can potentially get introduced to a new game, or try one of their favorites, with hopes that they keep coming back for more."

Given the amount of activities available on the ship, it's likely that gaming will be just part of the fun for passengers who set sail to the Caribbean this winter and beyond. But it says a lot about the impact videogames has had on entertainment when Royal Caribbean spent so much time, money and effort integrating videogames into the largest ship in the world..
Produced by John Gaudiosi