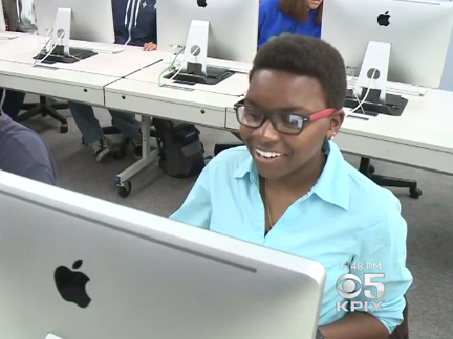 “As a 17-year-old junior with a 4.1 GPA, many wouldn’t expect me to have such a rough life,” Elexis Webster began her application essay to Students Rising Above. “I grew up on the streets with an abusive drug addict for a mother, along with an older brother who molested me countless times, plus constant sickness. My life wasn’t a life, it was a war zone.”

Webster has been an Honor Roll student throughout high school and plans to go to college -- but Elexis’ story is far from the norm, CBS SF Bay Area reported. Growing up, her family lived on the streets, in a dug-out, a car, a motel and anywhere else they could find shelter.

Elexis suffered constant physical abuse and said there were times when she and her sister were left alone for days with no food. She had developed a highly compromised immune system from her living conditions that left her sick in bed missing school for weeks at a time.

At age nine, Elexis had to be rushed to the hospital because her oxygen levels were so low that she nearly died.

“Just surviving in the household with two monsters, with monsters as a family, surviving in an environment like that and then being able to come out of it,” she said. “I knew I had to make the best of what happened to me.”

Intervention came when Elexis was 14, when police discovered her and her sister in a car during the middle of a school day. They arrested her mother and the two girls were placed in a foster home with a woman Elexis now lovingly calls “Mema.”

Elexis has been living with Mema for almost four years now. It was Elexis’ first and only foster home. Though Elexis said she initially viewed foster care in a negative way, her views soon changed.

When asked about her relationship with her foster mom, Elexis said, “Mema’s my mom. She’s my mom”.

Through her foster mom’s care and guidance, Elexis went to back to school. She said it was really hard to go to 8th grade after not going to school for three years while homeless. She was concerned she wouldn’t be able to keep up with the students her age. But her Mema was there with words of encouragement.

“I’m telling her, ‘You don’t allow your past to dictate your future,’” said Mema. “What’s happened to you, yes it’s happened, but right now you focus on yourself.”

Elexis did just that. “You have to move on,” she said. “I got to a place where I was able to become motivated to keep going and push for higher than a 4.0 and push to get into a really great college or university.”

Now, she says “life is great” -- so great that “it’s unbelievable to say I went through all of that.”

She now looks toward the future.

“I see success, I see happiness, and I see peace,” she said.