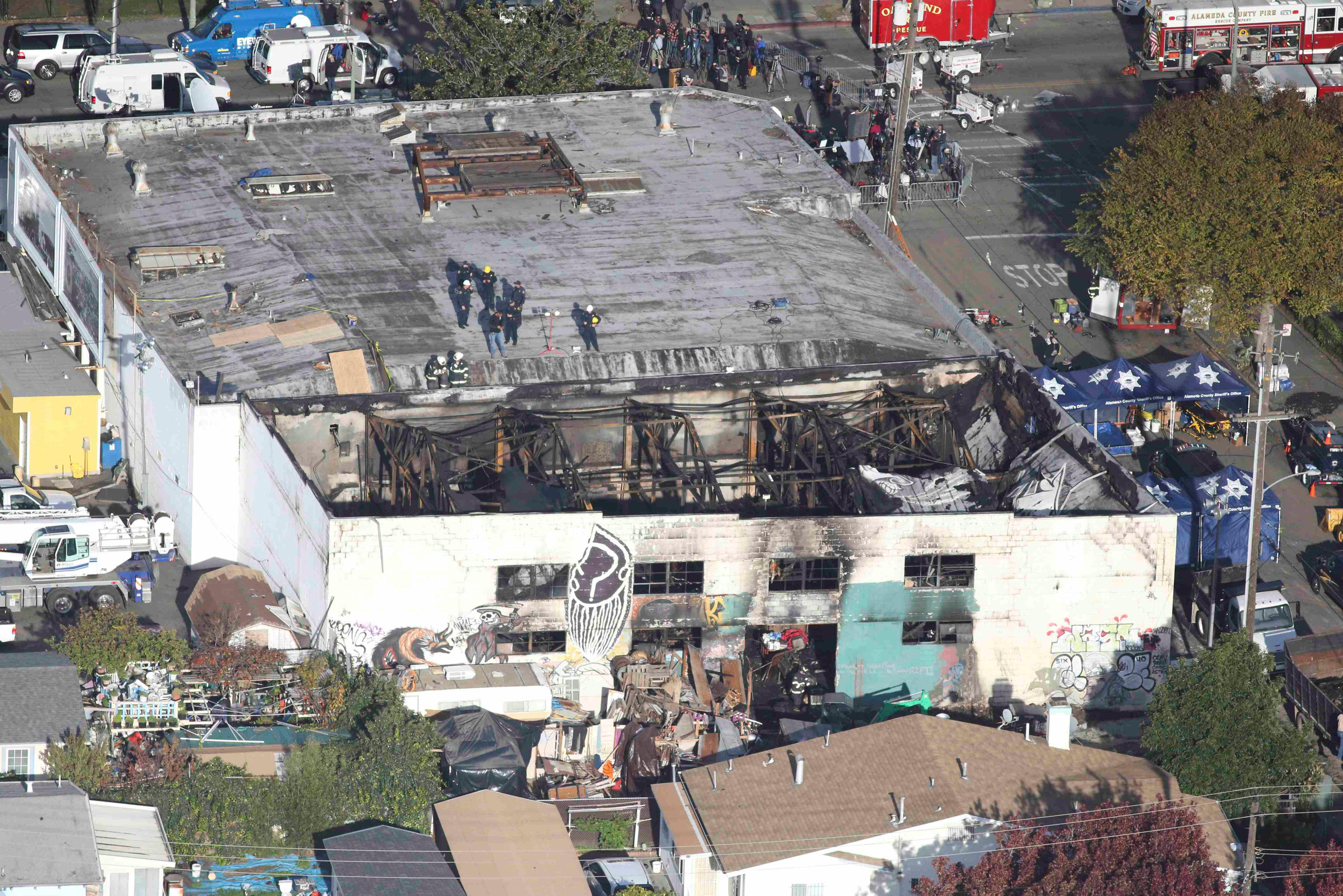 OAKLAND, Calif. – The search for bodies in the Oakland “Ghost Ship” warehouse fire was temporarily halted Monday amid fears of a building collapse, but not before the death toll officially rose to 36. The work was stopped overnight as engineers were called in to examine the structure. It resumed Monday morning once the situation was deemed safe.

In addition to the fears about a building collapse, officials said they will be forced to shut down electricity to up to 1,000 neighborhood customers as a large crane is brought in to the help in the recovery.

Oakland Fire Battalion Chief Melinda Drayton said first responders noticed late last night one of the brick walls of the building was leaning in at least a few inches, so they decided to stop their work.

CBS News correspondent Carter Evans reports the building’s exterior is mostly made of brick but the interior was mostly wood, which is now mostly burned away, leaving the rest of the structure vulnerable.

After saying the number of victims had officially hit 36, Drayton warned they expect to recover more bodies still. So far, only a handful of the victims have been publicly identified.

A cause of the fire has not yet been determined. Officials have opened a search for potential criminal activity, but no charges have been announced yet.

Officials told CBS News that crews have only searched through roughly half of the charred warehouse so far.

Video posted from inside shows a party going on just before the fire broke out. The warehouse had been converted into an eclectic live-work space for artists. Not much is left.

Officials said they came to inspect the property last month.

“All that I know is that we were not able to gain access to the interior of the building,” Oakland Mayor Libby Schaaf said.

Max Ohr told CBS News he lived at the artists collective for the past two years and helped host Friday’s event, and that he never saw any inspectors visit the place.

“If there were, we would have let them in,” Ohr said.

CBS News reached out to the building’s owner for comment, but have not yet heard back. Her daughter told the Los Angeles Times they believed the building was only being used as an art collective. An Oakland city councilman said the building was never permitted as a residence and was under investigation. Meanwhile, the federal Bureau of Alcohol, Tobacco, Firearms and Explosives is at the scene helping with the investigation.

Meanwhile, bouquets of sunflowers, single white roses, lilies and carnations were stuck in chain-link fences around the building Monday morning, as votive candles burned on sidewalks and post-it notes paid tribute to the Oakland fire missing and the dead in the most lethal building fire in the U.S. in more than a decade.

In a statement Monday, President Obama called the Oakland fire an “awful tragedy.”

“While we still don’t know the full toll of this disaster, we do know that an American community has been devastated, and many people – including young men and women with their whole futures ahead of them – have tragically lost their lives,” Mr. Obama said.

The president called Oakland “one of the most diverse and creative cities in our country,” and promised that the people touched by the tragedy “ will have the unwavering support of the American people.”

Kai Thomas and a group of red-eyed classmates from an arts high school in San Francisco pressed against police tape Sunday near the street corner where the “Ghost Ship” rapidly went up in flames late Friday, taking the life of a friend.

Three of the boys had been in the cramped and dark building, Thomas said, but one got separated from them 30 seconds before someone yelled, “Fire.”

“It was just really smoky and hard to see,” said Thomas, a high school junior who wasn’t there, but recounted what he had been told by two others who didn’t want to speak. “They jumped off the second-floor balcony and ran out.”

The boys waited for their 17-year-old friend for more than three hours, but he never emerged.

They wouldn’t give his name, but the victims included a 17-year-old, as well as people from Europe and Asia and some over 30. Officials had identified 11 of the dead — at least seven of them using fingerprints, but told family members of the missing that they may need to use DNA for more difficult identifications.

Lists of the missing circulated and many of those who had been unable to reach friends in the past two days had given up hope when authorities said people either escaped without injury or died inside.

The district attorney’s sent a team to search for signs of a crime in the warehouse that was already under investigation by the city for possible code violations. The space was only permitted as a warehouse and neighbors had complained of trash piling up and people were illegally living there.

Authorities would not answer questions about the couple that operated the Satya Yuga collective, who were identified as Derick Ion Almena and Micah Allison and were believed to have been out of the building at the time of the blaze.

The couple had a troubled relationship, said Michael Allison of Portland, Oregon, the father of Micah. He and other family members persuaded his daughter to go to a drug rehabilitation center in 2015, but Almena talked his way into the clinic and convinced Micah to leave with him, Michael Allison said.

The family’s three children had lice and needed new clothes, prompting family to call child-protective services, said Michael Allison, who wept as he talked. But Almena and his partner eventually were able to win custody of the children back and cut off all communication with Michael Allison, the father said.

“Whenever I could, I would to talk to (Micah) to get away from him because I knew he was dangerous from day one,” he said. “All of that has now been proven.”

A man identified as Derick Ion posted a Facebook message early Saturday, saying, “Everything I worked so hard for is gone. Blessed that my children and Micah were at a hotel safe and sound.” He drew rebukes online from others who said he was warned the building was unsafe.

Almena did not immediately respond to emails or phone numbers associated with him. No one answered a call to a number for Micah Allison.

The building had been carved into artist studios and visitors and former denizens said it was a cluttered death trap, piled with scrap wood, a mess of snaking electric cords and only two exits.

Almena had leased the space from its owner and then rented five recreational vehicles and other nooks on the ground floor as living spaces, said Danielle Boudreaux, a former friend of Almena and Allison. They held regular concerts and dance parties, like the one Friday, to make money, Boudreaux said.

Shelley Mack was drawn there by the promise of living among artists and paying a reasonable rent in an area where the tech boom has created a housing shortage and exorbitant leases. She after a few months two years ago when the place failed to live up to its promises.

“Some people were happy to have a roof over their head even though there was no heat or no place to eat or that it was filthy and infested,” Mack said. “You just get sucked in because it seems like it’s this nice place and this artistic community and they talk a good game. There are people there that wanted to be there and believed in it. And I think I did too for a little bit. And then I afterward, I was like, um no.”