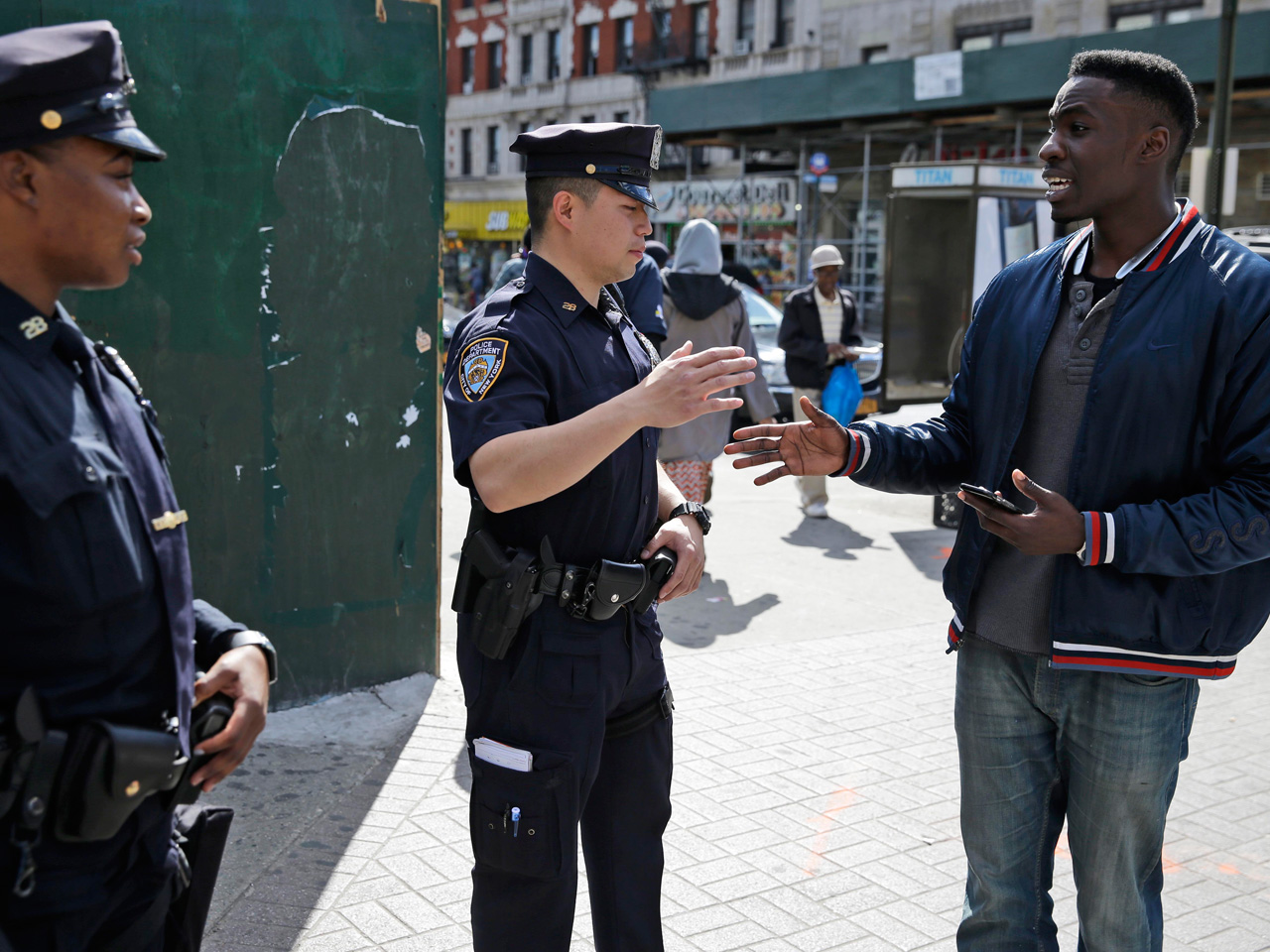 NEW YORK - Two New York City cops approach a gray sedan with a suspected drunken driver slumped over the wheel. They ask him to get out, and that's when the trouble begins.

The suspect, dressed in a rumpled suit, curses and hollers at the officers because he doesn't want to go to jail. He refuses to be handcuffed and backs away, yelling, "Can't we work this out?"

But even as the man's temper rises, the officers stay impassive and firm, explaining why they need to take him downtown. Eventually, the man calms down and gives up.

"I've realized," Detective Leonardo Pino said, "that if I try to meet his tone with my tone, it doesn't get better."

The scenario was fake - the suspected drunken driver was a fellow officer and the street scene was a set built in a Hollywood-style sound stage. It's all part of a massive, across-the-board retraining ordered for the nation's largest police force in the wake of last year's fatal arrest of Eric Garner.

The Associated Press got an exclusive look at the New York Police Department's three-day course that's aimed at discouraging verbal abuse and needless physical force. The message to every one of the department's 35,000 officers is, quite simply, keep cool.

Cynicism, condescension and complacency are a formula for escalating emotions that can put civilians - and officers' careers - in harm's way. As one instructor put it in a recent classroom session, "Once you put your hands on someone, you can't go back."

The instructors that day didn't mention Garner, the unarmed black man from Staten Island whose videotaped death in a chokehold - a tactic banned by the NYPD more than 20 years ago - fueled loud protests against police. But the case hangs heavy over the retraining, as do the ongoing protests in Baltimore, where a black suspect died of a spinal cord injury after his April 12 arrest.

"We want to talk people into their cuffs," said Lt. Suzanne St. Jacques, NYPD commanding officer for physical training and tactics. "We want to talk them down into compliance, de-escalate the situation. ... The emphasis right now is the talk down before the takedown."

Even when enforcing the law gets messy, officers "have to have a thick skin," said First Deputy Police Commissioner Benjamin B. Tucker, who oversees the police academy.

"People will goad you. People will say things to you. Face it - not everybody loves a cop," Tucker said. "But even when they don't like you, you have a responsibility to respect them and leave them with their dignity even as you do your job."

Over the three days at the department's new $750 million police academy, officers start in the classroom with instruction on verbal techniques for calming down a combative suspect. The course emphasizes the human side of the job, reminding officers that policing is about helping people.

"A lot of times officers can forget why they came on the job, what brought them to this profession to begin with," said another academy commander, Lt. Bobby Lorne Sheppard. "It's a very noble profession."

An entire day is spent in a gymnasium where instructors teach the latest tactics for taking down uncooperative suspects without putting pressure on the neck or chest.

Soon the academy will also introduce role-playing exercises, like the one with the drunken driver, using elaborate sets made to look like a grocery store, a subway station or a street scene.

The training is part of a broader effort by Police Commissioner William Bratton to mend the NYPD's relationship with minority communities that were frayed by the previous administration's widespread use of street stops - mainly of young men of color - as a tool to deter crime. Stop and frisks have steeply declined, and the department is revising the tactic with a federal monitor after a judge ruled it discriminated against minorities.

"It's both praiseworthy and indictable that they're just getting around to this in 2015," said Eugene O'Donnell, professor of police studies at John Jay College of Criminal Justice. "At least they're admitting they need to do this."

Still, some in the community worry the training will simply take the place of much-needed larger reform.

"Training is a positive step in the right direction, but ultimately it's inadequate in dealing with the systemic breakdown when it comes to accountability," said Monifa Bandele of Communities United for Police Reform, one of several groups that want laws to give watchdog agencies and prosecutors more power to investigate and punish officers if necessary.

The NYPD recently got another reminder of the potential pitfalls of seemingly mundane street encounters in the age of smartphones when a seasoned detective was videotaped cursing at an Uber cab driver who honked at the officer to get him to move his unmarked car. The detective - heard on tape imitating the driver's foreign accent and asking, "How long have you been in this country?" - was placed on desk duty.

"As you might imagine, I was not happy," Tucker said, when asked what he thought when he first viewed the video.

"We're trying to mightily close this gap in our relations with the community, and every time an incident like that occurs, it sets us back a little bit more."