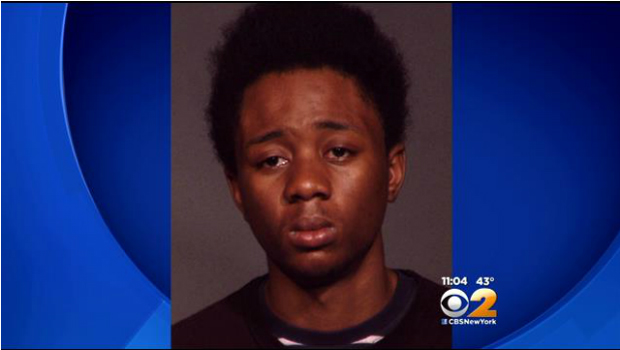 NEW YORK -- Police have identified the suspect who allegedly kicked a woman from behind, causing her to drop her baby, reports CBS New York.

Last week, a mother and her child were random targets -- kicked to the ground in broad daylight, according to investigators. Police announced Monday that they identified Alonzo Brown, 18, as the suspect in the attack.

The attack occurred at 12:45 p.m. on Friday, the victim told the station.

(Warning: The video below may be graphic for some viewers.)

The incident was caught on camera, showing the mother and her child walking past the suspect before he turned around and started to follow her. Police said that the suspect then kicked her from behind, causing the 24-year-old woman to fall down. The mother told CBS New York that she had the baby strapped to her chest.

The suspect took the woman's cellphone and ran off down the block, police said.

The mother told CBS New York that she got up, and a woman at a nearby store called 911. The mother and child were then taken to Jacobi Medical Center, treated and then released, police said.

She said she had never seen the suspect before.

"I got scared," the shaken mother said of what happened, according to the station.

Still, she was very grateful she and her child were both safe.

Officials told reporters that Brown had several arrests on his record, including criminal possession of a weapon.