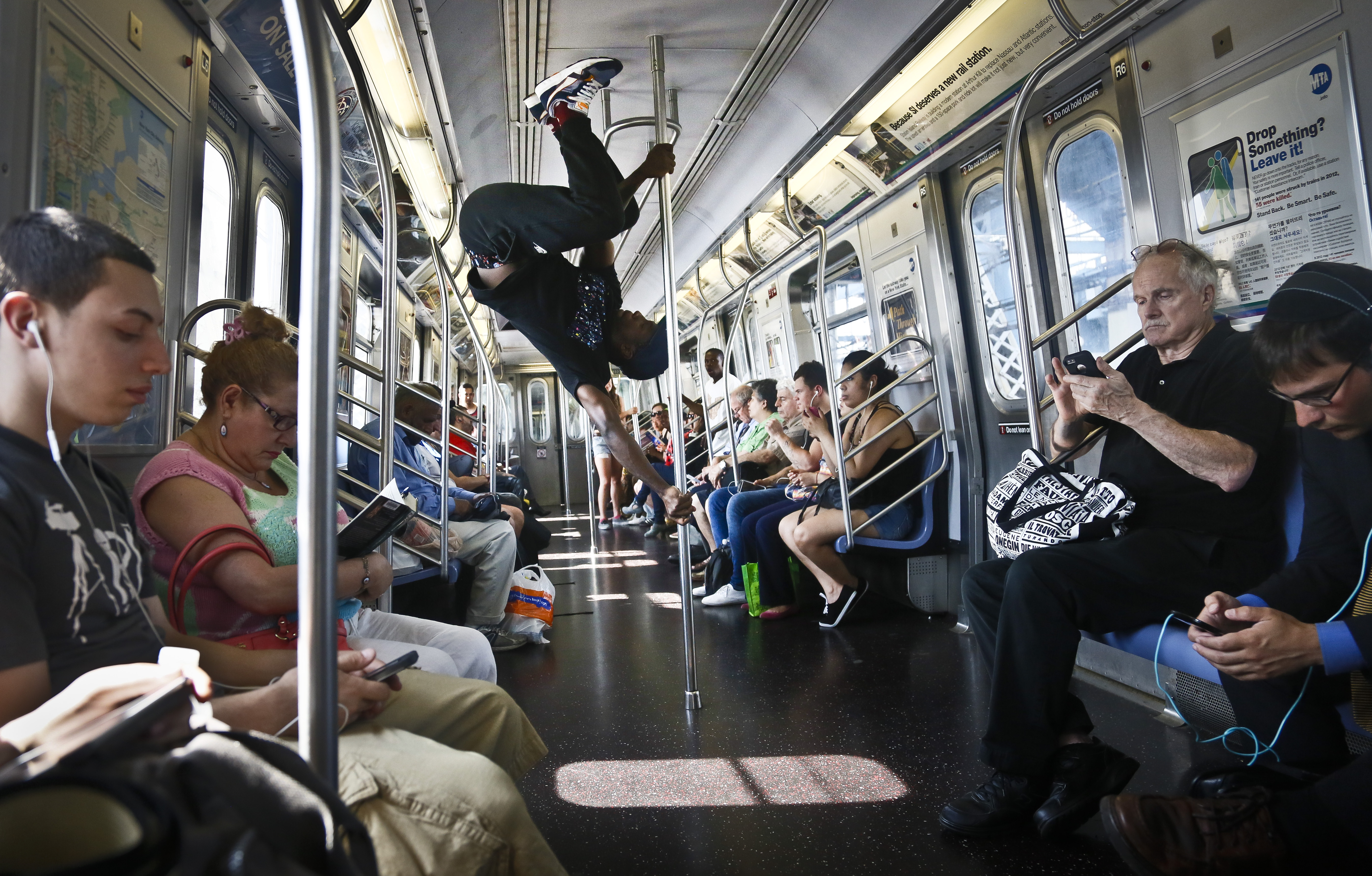 The New York Police Department is cracking down on the subway showmen who use the tight quarters of the nation's busiest transit system as moving stages for impromptu - and illegal - pass-the-hat performances. More than 240 people have been arrested on misdemeanors related to acrobatics so far this year, compared with fewer than 40 at this time a year ago.

Police Commissioner William Bratton acknowledges he is targeting subway acrobats as part of his embrace of the "broken windows" theory of policing - that low-grade lawlessness can cultivate a greater sense of disorder and embolden more dangerous offenders.

"Is it a significant crime? Certainly not," Bratton said recently. But the question is, he added, "Does it have the potential both for creating a level of fear as well as a level of risk that you want to deal with?"

The subway acrobats say they're just out to entertain, make a living and put a little communal levity in New York's no-eye-contact commuting.

"We all, as New Yorkers, get these force fields around us. We just try to go inside the train and change the vibe," said a performer named Besnkheru, who, because of the crackdown, spoke on the condition that his full name not be used.

Hopping on and off trains one recent afternoon, Besnkheru sang to amplified recordings ranging from Michael Jackson to Latin jazz while his performance partner, Domingo, danced, clowned and used the car's bars and poles like playground equipment. Sometimes, he dangled upside down with his head within a foot or two of a rider's face.

The pair got some glares but many smiles - some from passengers who initially seemed determined not to look - and several dollars.

"It's such a part of New York culture," said rider Joli Tribuzio, an actress.

"Most of them, I find, are very talented and I enjoy it," one woman told Glenn Schuck of CBS Radio's 1010 WINS.

But other passengers resent becoming a captive audience for acrobats and break-dancers in a cramped subway car.

"I don't like all that action right in front of my face," rider Kesia Hudson said.

Police believe most riders agree with Hudson. And though no injuries have been reported, they also insist the showmanship is a safety issue.

Police have responded by studying passenger complaints to determine when and where to put plainclothes officers on trains to nab acrobats.

The arrests are usually uneventful but can turn nasty. An acrobat who was being arrested spit on one officer and tried to bite another.

Two decades ago during Bratton's previous stint as commissioner, his "broken windows" crackdowns targeted public drinking, panhandling and most notably the squeegee men who sprang out at intersections to wash the windshields. This time, the department has targeted illegal motorcycles, graffiti - and the acrobats.

Andrew "Goofy" Saunders and some friends started doing routines on trains in 2007, hoping to make $10 to enter a dance competition. Seven years later, the group - W.A.F.F.L.E., for We Are Family For Life Entertainment - has a shoe-brand sponsor and has been booked for music videos, parties, even a wedding.

"We're not just knuckleheads. ... We're actually about something," said Saunders, 20.

But the roughly 12-person troupe has largely stopped performing on subways because of the police attention. Members now hope to line up a public space to flip with permission.

"There's no reason for being locked up for doing what you love," Saunders said.

CBS New York reports that many straphangers said they enjoy the performers or just ignore them.

"Most of them, I find, are very talented and I enjoy it," one woman told 1010 WINS' Glenn Schuck.

"They're providing not just entertainment, but it's work," another man said. "They are putting in time every day."

The MTA has a program in place called Music Under New York, CBS New York reports.

After an audition, 300 performers are accepted and given a high-profile, highly trafficked spot underground, off the trains, where they can perform for tips.

The MTA said it is "studying the possibility of installing surveillance cameras in future subway car models" but admitted it "would be a difficult technical challenge."